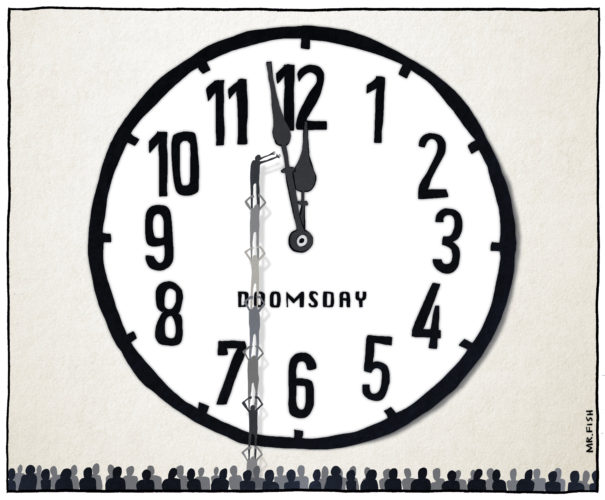 Monday, Oct. 7. marks the start of what the British-based group Extinction Rebellion is calling the International Rebellion. Thousands of people will occupy the centers of some 60 cities around the globe, including Madrid, Amsterdam, Paris and New York, to stage nonviolent occupations of bridges and roads for at least a week. The goal is to paralyze commerce to force the ruling elites to respond to the climate emergency. I will be at Battery Park in New York to join them Monday morning.

The protests, which organizers say will likely lead to hundreds of arrests, will employ a variety of tactics, including activists who will superglue themselves to trains, subways and buildings as well as build temporary encampments to disrupt traffic. The New York event will open at 9:30 a.m. Monday with a "funeral march" from Battery Park. At 2 p.m. Monday, organizers will set up base in Washington Square Park and use it as a staging area. Activists will congregate at the park and fan out in groups across the city to carry out protests. The disruptions during the week in New York will occur in a variety of locations, including in the Financial District and at the New York Stock Exchange, Columbia University and major cultural institutions. In Chicago, there will be an attempt to occupy City Hall and Daley Plaza. London activists, who shut much of the city down in April for 10 days and saw 1,000 arrests, are planning to hold out for three weeks.

"It is our sacred duty to rebel in order to protect our homes, our future, and the future of all life on Earth," Extinction Rebellion writes. This is not hyperbolic. We have, as every major climate report states, very little time left. Indeed, it may already be too late.

"People have to go to the capital city," said Roger Hallam, the co-founder of Extinction Rebellion and a researcher at King's College London, when we spoke earlier this year. "That's where the elite is, the business class. That's where the pillars of the state exist. That's the first element. Then you have to have a lot of people involved. They have to break the law. There's no point in just doing a march. They have to literally close down the streets. They have to remain nonviolent. That's absolutely crucial. Once you get violent, police and the state have an excuse to remove you. It's got to be cultural. You make it into a sort of Woodstock affair. Then thousands more people come onto the streets.

"There's a fundamental difference between breaking the law and not breaking the law. It's a binary difference. When you break the law, then you're massively more effective in terms of material and psychological influence as well as media interest. The more dramatic the civil disobedience, the better. It's a numbers game. You want people blocking the streets, but you need 10, 20, 30 thousand. You don't need 3 million. You need enough for the state to have to decide whether to use repression on a mass scale or invite you into the room. The gambit, of course, particularly in the U.K., is that the state is weak. It's been hollowed out by neoliberalism. They're going to find themselves overwhelmed. We will get in the room."

The group stresses what it calls a "pre-social-media age" strategy for organizing. It has created decentralized structures to make decisions and issue demands. It sends out teams to give talks in communities. It insists that people who participate in the actions of Rebellion Extinction undergo "nonviolent direct-action" training so they will not be provoked by the police or opposition groups.

"Most of the recent mass mobilizations have been social-media-fueled," Hallam said. "Consequently, they have been chaotic. They are extremely fast mobilizations. Social media's a bit like heroin. It's a high, but then it collapses, like we've seen. It becomes chaotic or violent. A lot of modern social movements put stuff on social media. It gets clogged up with trolls. There are lots of radical-left organizations arguing about different privileges. We've circumvented that and gone straight to the 'common people,' as you might say. We've held meetings in village town halls and city halls. We go around the country in a 19th-century sort of way, saying, 'Hey guys. We're all fucked. People are going to die if this isn't sorted out.' The second half of the talk is: There's a way of dealing with this called mass civil disobedience.

"Nonviolent discipline, as the research shows, is the No. 1 criterion for maximizing the potential for success. This is not a moral observation. Violence destroys movements. The Global South has been at it for a few decades. Violence just ends up with people getting shot. It doesn't lead anywhere. You might as well take your chances and maintain nonviolent discipline. There's a big debate within the radical left over the attitude toward the police. This debate is a proxy for the justification of violence. As soon as you don't talk to police, you're more likely to provoke police violence. We try to charm the police so they'll arrest people in a civilized way. The metropolitan police [in London] are probably one of the most civilized police forces in the world. They have a professional team of guys who go to social protests. We've been in regular communication with them. We say to the police, 'Look, we're going to be blocking the streets. We're not going to not do that because you ask us not to.' That's the first thing to make clear. This is not an item for discussion. They know it's serious. They don't try to dissuade us. That would be silly. What they are concerned about is violence and public disorder. It's in our interest as civil disobedience designers not to have public disorder, because it becomes chaotic."

"You're basically holding the economy of a city to ransom," he said of the shutdowns. "It's the same dynamic as a labor strike. You want to get into the room and have a negotiation. Extinction Rebellion hasn't quite decided what that negotiation is going to be. We've got three demands -- the government tells the truth, the carbon emissions go to zero by 2025, which is a proxy for transformation of the economy and the society, and we have a national assembly which will sort out what the British people want to do about it. The third demand [calling for a national assembly] is a proxy for transforming the political structure of the economy. It proposes a different, concrete form of democratic governance, based around sortition rather than representation. This has had a big influence in Ireland and Iceland. The optimal transition is going to be from the corrupted 'representational' model to a sortition model in the same way aristocratic law shifted to representational law at the end of the 17th and beginning of the 19th century.

"The intelligent people on the political left have woken up to the fact that we've got an existential emergency that could destroy human society in the next 10 years. It's in the cards. A lot of us have already gone through the grief process. But these [newly awakened] people just had that enlightenment. They're in shock. They're maintaining a veneer of 'It's sort of OK.' This is what the Green Deal [a United Kingdom government policy initiative] is about. It is an attempt to pretend that industrialization can stay the same. We can all still be wealthy. We can all still have great jobs. It is like Roosevelt's New Deal. But the New Deal was based on the idea that we can carry on plundering nature and nothing's going to happen. Maybe that was right in the 1930s, but it's not right anymore. It's a matter of physics and biology. We simply cannot maintain these levels of consumption. They haven't reckoned with that. One of the main reasons the climate debate has not gotten into a serious mode over the last 30 years is because people who are in charge of informing the public are terrified of telling the public that they can't have the high consumer lifestyle anymore. It's a taboo. But like any addiction, there comes a moment of truth. We're there now."

"For 30 years we've had one political metaphysic, reform," he said. "You either reform or you are irrelevant. But now, we have two massive, exponentially increasing structural faults -- the inequality problem and the climate problem. A lot of people -- because of path dependency dynamics -- have worked for 30 years in this lost-cause sort of space. They're desperate for change. For 30 years, they've been putting their money on reform. The tragedy -- and you can see this in the history of political struggle going back hundreds of years -- is there's a flip where the reformists lose control. They're still living in the past world. The revolutionaries, who everyone thinks are ridiculously naive, suddenly come to the fore. It's usually a quake. It's not a gradualist thing. It's a double tragedy because it's a quake and the revolutionaries usually aren't organized. I think that's what's happening now. It has very big implications for [resistance against] fascism. Unless you have a clearheaded mass mobilization on the left, which is connected with the working class, you're not going to be able to stop the fascism."

These protests are a welcome antidote to the choreographed and ineffectual climate marches of the past in which protesters dutifully stayed in police-designated areas and dispersed after a few hours. The goal is not simply to protest but to throw a wrench into the machine. The group has 10 working principles that center on nonviolent resistance. These principles are:

We have a shared vision of change: to create a world that is fit for generations to come.

We set our mission on what is necessary, mobilizing 3.5% of the population to achieve system change using ideas such as "momentum-driven organizing" to achieve this.

Related Topic(s): Climate; Drought; Flood; Police; Protest; Rebellion, Add Tags
Add to My Group(s)
Go To Commenting
The views expressed herein are the sole responsibility of the author and do not necessarily reflect those of this website or its editors.