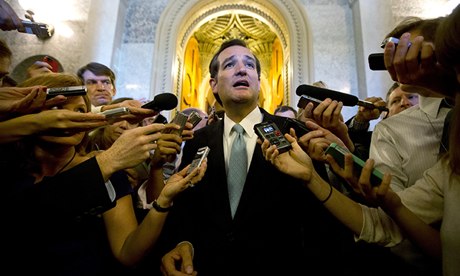 Editor's note: Chris Hedges will speak in the Los Angeles area Oct. 13 on the myth of progress and the collapse of complex societies. Robert Scheer will lead a discussion, with a Q-and-A period to follow. Click here for more information.

There is a desire felt by tens of millions of Americans, lumped into a diffuse and fractious movement known as the Christian right, to destroy the intellectual and scientific rigor of the Enlightenment, radically diminish the role of government to create a theocratic state based on "biblical law," and force a recalcitrant world to bend to the will of an imperial and "Christian" America. Its public face is on display in the House of Representatives. This ideology, which is the driving force behind the shutdown of the government, calls for the eradication of social "deviants," beginning with gay men and lesbians, whose sexual orientation, those in the movement say, is a curse and an illness, contaminating the American family and the country.

Once these "deviants" are removed, other "deviants," including Muslims, liberals, feminists, intellectuals, left-wing activists, undocumented workers, poor African-Americans and those dismissed as "nominal Christians" -- meaning Christians who do not embrace this peculiar interpretation of the Bible -- will also be ruthlessly repressed. The "deviant" government bureaucrats, the "deviant" media, the "deviant" schools and the "deviant" churches, all agents of Satan, will be crushed or radically reformed. The rights of these "deviants" will be annulled. "Christian values" and "family values" will, in the new state, be propagated by all institutions. Education and social welfare will be handed over to the church. Facts and self-criticism will be replaced with relentless indoctrination.

U.S. Sen. Ted Cruz -- whose father is Rafael Cruz, a rabid right-wing Christian preacher and the director of the Purifying Fire International ministry -- and legions of the senator's wealthy supporters, some of whom orchestrated the shutdown, are rooted in a radical Christian ideology known as Dominionism or Christian Reconstructionism.

This ideology calls on anointed "Christian" leaders to take over the state and make the goals and laws of the nation "biblical." It seeks to reduce government to organizing little more than defense, internal security and the protection of property rights. It fuses with the Christian religion the iconography and language of American imperialism and nationalism, along with the cruelest aspects of corporate capitalism. The intellectual and moral hollowness of the ideology, its flagrant distortion and misuse of the Bible, the contradictions that abound within it -- its leaders champion small government and a large military, as if the military is not part of government -- and its laughable pseudo-science are impervious to reason and fact. And that is why the movement is dangerous.

The cult of masculinity, as in all fascist movements, pervades the ideology of the Christian right. The movement uses religion to sanctify military and heroic "virtues," glorify blind obedience and order over reason and conscience, and pander to the euphoria of collective emotions. Feminism and homosexuality, believers are told, have rendered the American male physically and spiritually impotent. Jesus, for the Christian right, is a man of action, casting out demons, battling the Antichrist, attacking hypocrites and ultimately slaying nonbelievers.

This cult of masculinity, with its glorification of violence, is appealing to the powerless. It stokes the anger of many Americans, mostly white and economically disadvantaged, and encourages them to lash back at those who, they are told, seek to destroy them. The paranoia about the outside world is fostered by bizarre conspiracy theories, many of which are prominent in the rhetoric of those leading the government shutdown. Believers, especially now, are called to a perpetual state of war with the "secular humanist" state. The march, they believe, is irreversible. Global war, even nuclear war, is the joyful harbinger of the Second Coming. And leading the avenging armies is an angry, violent Messiah who dooms billions of apostates to death.

Dominionists believe they are engaged in an epic battle against the forces of Satan. They live in a binary world of black and white. They feel they are victims, surrounded by sinister groups bent on their destruction. They have anointed themselves as agents of God who alone know God's will. They sanctify their rage. This rage lies at the center of the ideology. It leaves them sputtering inanities about Barack Obama, his corporate-sponsored health care reform bill, his alleged mandated suicide counseling or "death panels" for seniors under the bill, his supposed secret alliance with radical Muslims, and "creeping socialism." They see the government bureaucracy as being controlled by "secular humanists" who want to destroy the family and make war against the purity of their belief system. They seek total cultural and political domination.

All ideological, theological and political debates with the radical Christian right are useless. It cares nothing for rational thought and discussion. Its adherents are using the space within the open society to destroy the open society itself. Our naive attempts to placate a movement bent on our destruction, to prove to it that we too have "values," only strengthen its supposed legitimacy and increase our own weakness.

Dominionists have to operate, for now, in what they see as the contaminated environment of the secular, liberal state. They work with the rest of us only because they must. Given enough power -- and they are working hard to get it -- any such cooperation will vanish. They are no different from the vanguard described by Lenin or the Islamic terrorists who shaved off their beards, adopted Western dress and watched pay-for-view pornography in their hotel rooms the night before hijacking a plane for a suicide attack. The elect alone, like the Grand Inquisitor, are sanctioned to know the truth. And in the pursuit of their truth they have no moral constraints.

I spent two years inside the Christian right in writing my book "American Fascists: The Christian Right and the War on America." I attended services at megachurches across the country, went to numerous lectures and talks, sat in on creationist seminars, attended classes on religious proselytizing and conversion, spent weekends at "right-to-life" retreats and interviewed dozens of followers and leaders of the movement. Though I was sympathetic to the financial dislocation, the struggles with addictions, the pain of domestic and sexual violence, and the deep despair that drew people to the movement, I was also acutely aware of the dangerous ideology these people embraced. Fascist movements begin as champions of civic improvement, communal ideals, moral purity, strength, national greatness and family values. These movements attract, as has the radical Christian right, those who are disillusioned by the collapse of liberal democracy. And our liberal democracy has collapsed.

We have abandoned our poor and working class. We have created a government monster that sucks the marrow out of our bones to enrich and empower the oligarchic and corporate elite. The protection of criminals, whether in war or on Wall Street, is part of our mirage of law and order. We have betrayed the vast and growing underclass. Most believers within the Christian right are struggling to survive in a hostile world. We have failed them. Their very real despair is being manipulated and used by Christian fascists such as the Texas senator. Give to the working poor a living wage, benefits and job security and the reach of this movement will diminish. Refuse to ameliorate the suffering of the poor and working class and you ensure the ascendancy of a Christian fascism.

The Christian right needs only a spark to set it ablaze. Another catastrophic act of domestic terrorism, hyperinflation, a series of devastating droughts, floods, hurricanes or massive wildfires or another financial meltdown will be the trigger. Then what is left of our anemic open society will disintegrate. The rise of Christian fascism is aided by our complacency. The longer we fail to openly denounce and defy bankrupt liberalism, the longer we permit corporate power to plunder the nation and destroy the ecosystem, the longer we stand slack-jawed before the open gates of the city waiting meekly for the barbarians, the more we ensure their arrival.

A previous version of this column contained a quotation attributed to Sen. Ted Cruz that might have originated as a parody. Thanks to our readers for their sharp eyes.

Related Topic(s): Christian Right; Government Bullying; Government Corruption; Right Wing Extremists; Right Wing Meltdown; Righteous Arrogance, Add Tags
Add to My Group(s)
Go To Commenting
The views expressed herein are the sole responsibility of the author and do not necessarily reflect those of this website or its editors.