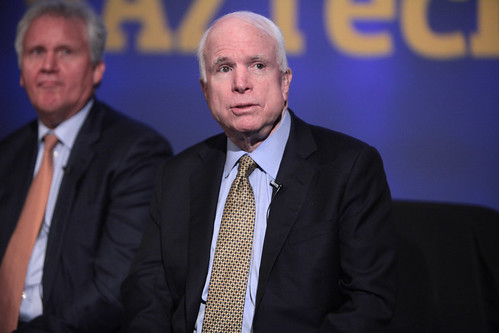 Caitlin Johnstone warned us that the liberals were going to make a hero out of warmonger John McCain.

All morning long NPR has been conducting eulogies for warmonger McCain, who is having a state funeral both in DC and in Arizona. Liberal Democrat Charles Schumer wants to rename the senate office building named after Richard Russell, a real senator, after McCain, a pimp for the military/security complex and supporter of every terrorist group that Washington could organize to sic on the Soviets, the Sandinistas, the Libyans, the Syrians. https://consortiumnews.com/2018/08/27/the-other-side-of-john-mccain/

McCain's hero status from being a POW in North Vietnam is disputed by other POWs who say that he collaborated with the North Vietnamese.

It was John McCain's father, Admiral John McCain, who covered up the Israeli attack on the USS liberty that produced 208 US Navy casualties. Admiral Tom Moorer, Chief of Naval Operations and Chairman of the Joint Chiefs of Staff, told me that a real US Navy admiral would have resigned before he would participate in a shameful coverup at the expense of the lives of American service men.

In America the way to become a hero is to stand up for war and more war. On this basis, John McCain is a hero.

NPR's other constantly repeated news story today is a UN report that top military figures in Myanmar are guilty of crimes against humanity in their treatment of Muslims in Rakhine province. Allegedly 700,000 Muslims have fled from Myanmar.

Assume that this story is true and not just Washington orchestrated propaganda against Myanmar's government whose close relations with China have offended Washington. How do the atrocities against Muslims in Myanmar compare with Washington's atrocities against Muslims that have destroyed in whole or part seven countries in the 21st century, displacing and sending fleeing millions of Muslims who are "diversifying Europe?"

How do the Myanmar atrocities compare to Israel's genocide of the Palestinians?

How do they compare to the Saudi genocide of the Yemenis?

Why is it that NPR and the BBC can fixate on Myanmar and ignore far worse atrocities?

In America to be associated with crimes against humanity brings hero status. In Myanmar it brings denunciation and demand for trials before the International Criminal Court.

Related Topic(s): Hypocrisy; John McCain; Presstitutes, Add Tags
Add to My Group(s)
Go To Commenting
The views expressed herein are the sole responsibility of the author and do not necessarily reflect those of this website or its editors.