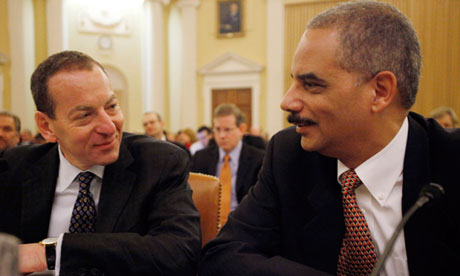 PBS' Frontline program on Tuesday night broadcast a new one-hour report on one of the greatest and most shameful failings of the Obama administration: the lack of even a single arrest or prosecution of any senior Wall Street banker for the systemic fraud that precipitated the 2008 financial crisis: a crisis from which millions of people around the world are still suffering. What this program particularly demonstrated was that the Obama justice department, in particular the Chief of its Criminal Division, Lanny Breuer, never even tried to hold the high-level criminals accountable.

What Obama justice officials did instead is exactly what they did in the face of high-level Bush-era crimes of torture and warrantless eavesdropping: namely, acted to protect the most powerful factions in the society in the face of overwhelming evidence of serious criminality. Indeed, financial elites were not only vested with immunity for their fraud, but thrived as a result of it, even as ordinary Americans continue to suffer the effects of that crisis.

Worst of all, Obama justice officials both shielded and feted these Wall Street oligarchs (who, just by the way, overwhelmingly supported Obama's 2008 presidential campaign) as they simultaneously prosecuted and imprisoned powerless Americans for far more trivial transgressions. As Harvard law professor Larry Lessig put it two weeks ago when expressing anger over the DOJ's persecution of Aaron Swartz: "we live in a world where the architects of the financial crisis regularly dine at the White House." (Indeed, as "The Untouchables" put it: while no senior Wall Street executives have been prosecuted, "many small mortgage brokers, loan appraisers and even home buyers" have been).

As I documented at length in my 2011 book on America's two-tiered justice system, With Liberty and Justice for Some, the evidence that felonies were committed by Wall Street is overwhelming. That evidence directly negates the primary excuse by Breuer (previously offered by Obama himself) that the bad acts of Wall Street were not criminal.