(Image by Unknown Owner)   Details   DMCA
Each family is permitted up to three buckets of water a day. They must use that small amount of water for cooking, bathing, washing and drinking.
Photo credit: Alessandro Rampietti | Al Jazeera
There is a war on poor people of the "developing" world and a war on those who try to uphold their country's national interests and people's human rights above those of the imperialists at the UN, NATO and Washington. It is in their best "interests" that the people of developing countries die quietly.
They are determined to control the world's resource using whatever means necessary. Usually, the means they favor is military, but they have other means as you will read below.
They are committing genocide in Haiti, in Libya, in Somalia. Globally they are grabbing so-called "water rights" and destroying poor people's access to clean water.
"Water Privatization Conflicts." Read more at academic.evergreen.edu. 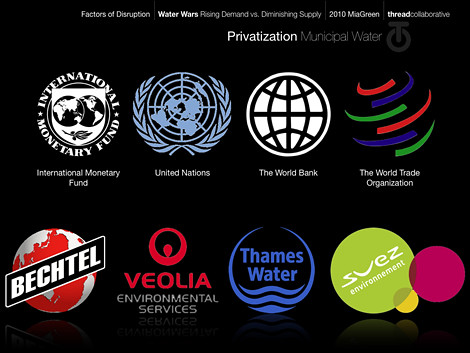 "Water must be free for sustenance needs. Since nature gives water to us free of cost, buying and selling it for profit violates our inherent right to nature's gift and denies the poor of their human rights. "
-- Vandana Shiva, Indian environmental scientist
Breaking News:
Ezili Dantò Riseup lists ( click on the I'm not a spammer button to read posts) :
Tragic cholera outbreak in Port de Paix killing scores of Haitians.
Flooding Scours the Whitewash From Haiti Aid Efforts
According to investigative and political writer Georgianne Niebner, aid agencies funded by U.S. Agency for International Development (USAID) have tricked donors into paying for the whitewashing of Haiti's cholera pandemic. Now with the rains, no amount of public relations, false reporting and outright lying can hide the rot and neglect they've tried to hide. Mother Nature and the dispassionate entity known as cholera are slowly exposing them and cholera is ravaging Haiti. Read Niebner's article at the LA Progressive.
Cholera is returning with the rains, after initially spreading throughout the water supply in Haiti after MINUSTAH imported the scourge to Haiti. The UN (MINUSTAH) Nepalese Camp in Mirebalais infected the Artibonite river system at the Meye river with cholera by dumping contaminated feces.
The sanitation at the Mirebalais MINUSTAH camp was not sufficient to prevent the fecal contamination of the Artibonite River. But the cynically named, United Nations Stabilization Mission in Haiti (MINUSTAH) claimed that the UN Nepalese camp's sanitation system was not only up to international standards; it was up to EPA standards.
The Lancet, a weekly peer-reviewed general medial journal, which is one of the world's best known, oldest, and most respected general medical journals, expects that a mere 1% weekly reduction in consumption of contaminated water would avert 105,000 cases of cholera and 1500 deaths in Haiti. However, the measures being employed by the aid agencies are insufficient and The Lance t projected in April this year that there will be 779,000 cases of cholera in Haiti and 11,100 deaths between March 1 and November 30, 2011. Those are the conservative figures, the human tragedy could be much worst.
Water is life. Destroying a country's water supply is a crime against humanity
In 1998, the U.S. prevented the Inter-American Development Bank (IDB) from going through with disbursing approved loans (targeted for building water infrastructure) to the Haitian government in order to destabilize the Aristide government. The IDB was following orders from Washington.

Washington's "humanitarians" and their "partners" (in crime) have no problem with abusing, starving, killing, maiming, (sending formaldehyde trailers to Haitian school children) or preventing aid boats from entering Gaza. Washington doesn't bat an eye over spending hundreds of millions to bomb the people of Libya. But will negotiate to screw over the sick and the old by threatening to cut their social security and healthcare. The poor, ill and vulnerable are used as political pawns. They are multinationals, they have no allegiance or loyalty to the U.S. except in so far as they can form a power bloc to screw over the rest of humanity. People's lives are a part of their political, cynical, inhumane war games, power struggles and greed.
Background on IDB/U.S. human rights violations in Haiti
"Letter to IDB President: On behalf of Haitian Supporters." Read the story at the Robert F. Kennedy Center for Justice and Human Rights.

Now the US and NATO are using the same inhumane, criminal tactics in Libya: violating the people's right to have access to clean, plentiful water, in desert.
Nato Destroys Libya's $30 Billion Water Pipeline. Read the story at English Pravda.ru.

People will die as a result of this... this is terrorism and will lead to mass genocide. More people over a longer period of time will die than from their sick joke of a "humanitarian war" in Libya. Just as people are dying in Haiti due to the criminal actions of the UN, U.S. and IDB.
Famine and drought in the horn of Africa. Was it preventable?
Hell yeah! Somalia is in the cross-hairs of the war criminals in Washington. It is targeted for defying the imperialists' in their quest for a "New World Order." Remember how Clinton had to ignominiously pull out troops from Somalia? Just Google: "Clinton's defeat in Somalia." They are out for the blood of the Somali people.

Not surprising then that we learned last week that in Somalia, the CIA has secret prisons and is training killers as they have all over the world. See the Democracy Now story: "Jeremy Scahill Reveals CIA Facility, Prison in Somalia as U.S. Expands Covert Ops in Stricken Nation."

The famine and drought that is killing the weak and poor of Somalia was preventable. The drought was predicted last year. Why weren't preparations made by the "peacemakers", "humanitarians" and "the world's policeman" to save some lives?
The Somali Prime Minister accuses the UN of holding back aid food. Abdiweli Mohamed Ali says relief aid is not reaching those in need in famine-stricken Horn of Africa nation. Read the story at Aljazeera.
A similar situation occurred in Haiti, where the UN/US prevented the disbursement of food and aid in Haiti by militarizing the "rescue" effort after the earthquake.
In fact, the democratic president of the United States might as well have invited the extremis right-wingers at the Heritage Foundation for advice o n how to respond to the quake crisis in Haiti. This week, the American people seem to have finally caught on the fake populist in the White House as his poll numbers have plummeted during the debt ceiling circus. Hey Republicans and Democrats, those of us who read know the cat and mouse game you are playing with our lives is pure theater. The Republicans have already assured Wall Street that they will be raising the debt ceiling. Whatever they say, the Republicans are going to raise the debt ceiling.
We see you for the political cannibals you are Washington.
_________________________________
UPDATE 07.30.2011

US-backed forces launch military offensive in Somalia as aid is used as a weapon of war
by Susan Garth, 30 July 2011 | wsws.org

"[...] A drought which has put 12 million people at risk across East Africa has become the pretext for the US to step up military aggression through its proxy forces. The same humanitarian justification was given for the US military intervention in Somalia begun by President George Bush in 1992 under the codename Operation Restore Hope and continued by President Bill Clinton. US forces claimed to be protecting aid convoys, but terrorised the civilian population as they hunted down supposed terrorists. Since then, Somalia has become a focus for Obama's war on terror.

It seems that the US-backed forces have taken the opportunity offered by the drought and famine to extend the control of the TFG. Heavy shelling was reported in the capital Mogadishu on Thursday, July 28.

Analysts believe that the drought has weakened al-Shabab. Abdiwahab Sheikh Abdi Samed, a Somali political analyst with Southlink Consultants in Nairobi maintains that a rift has opened up between clan elders in the famine-struck areas and al-Shabab militants. It seems that the the US and its allies in the region are determined to use the drought to strike a blow against al-Shabab.

"The day's of al-Shabab are numbered," Samed said, speaking on the US propaganda station Voice of America.

The military offensive is only one part of their strategy. Aid is itself being used as a weapon of war. Samed went on, "My biggest worry is only one thing. If the international community is allowed to provide food and water and basic necessities to the al-Shabab controlled areas, they will receive a logistical support so that they are now prolonging the fighting. [...]"