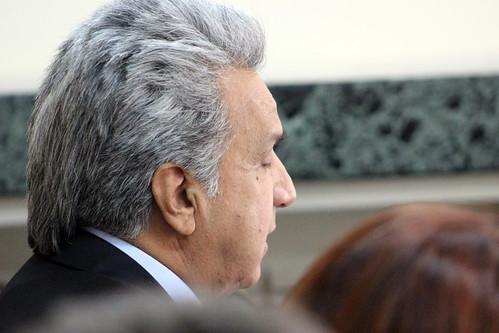 The US has been planning to have Julian Assange handed over for a longtime, that much is obvious. Mike Pence, the Vice President, was visiting Ecuador last year, notionally to discuss the Venezuela situation, and trade. But it was fairly obvious at the time, and even more so now, that they were discussing the details of Assange being handed over to UK authorities, and eventually extradited to the US.

In terms of quid pro quo, the situation is clear-cut - In February, Ecuador got a $4.2 BILLION loan approved by the International Monetary Fund (amongst other pay-outs). Reuters reported on February 19th of this year:

"Moreno has begun to implement an austerity plan that includes layoffs of workers at state-owned companies and cuts to gasoline subsidies, also plans to find a private operator for state-run telecoms company CNT and other state-owned firms."

So, less than 2 months ago, it was announced Ecuador was going to receive over 10 billion dollars of loans. Where all that money will eventually end up is anyone's guess, it certainly isn't being spent on infrastructure or state enterprise:

"Moreno has begun to implement an austerity plan that includes layoffs of workers at state-owned companies and cuts to gasoline subsidies, also plans to find a private operator for state-run telecoms company CNT and other state-owned firms."

President Moreno has already been the subject of numerous corruption accusations. So these "loans", nominally for "[creating] work opportunities for those who have not yet found something stable", could more realistically be described as "a pay-off".

The Economist ran a story on April 12th, the day after Assange was arrested, praising Lenin Moreno's economic policies, and blaming the previous administration for the "mess" that Moreno has to clear ups. (Of course, the idea that Moreno is handling the economy brilliantly, but somehow also needs over $10 billion dollars in loans is never addressed. A tiny logical contradiction compared with the nonsense the MSM dish-up on a daily basis).

The basic structure of the give-and-take of this situation is fairly obvious.

Less on the nose, but still definitely present, is the slow-burn media-based campaign of defamation and smears directed at Assange. A campaign designed to weaken public support for him and lessen the potential outcry if/when the UK handed him to US authorities, who famously use "enhanced interrogation" on suspects.

Last October, just three months after Pence's Ecuador visit, an Ecuadorian government memo was "leaked" claiming that Assange had bad personal hygiene habits, was hacking people's electrical devices, and neglecting his cat. These charges, cynically designed to make Assange a figure of ridicule, got massive play in the media. The Guardian, ever at the vanguard of sticking the boot in on Assange, ran a gleeful opinion piece mocking him. As did many other publications.

Assange, who had his internet access shut-off in March of last year, was unable to defend himself.

To this day we have no way of knowing if there is any veracity to this "leaked" memo, but real or not, it served both to belittle Assange in the public mind, and provide Ecuador with an excuse to get rid of him (they set up "rules", claim Assange wasn't following them and THAT's why they kicked him out - not the 10 billion dollars they got from international financial institutions).

The media are, of course, complicit in this lie.

Various outlets, from the Guardian, to CNN to the Australian have written "explainer" articles with headlines such as: 'Rude, ungrateful and meddling': why Ecuador turned on Assange.

Related Topic(s): Julian Assange, Add Tags
Add to My Group(s)
Go To Commenting
The views expressed herein are the sole responsibility of the author and do not necessarily reflect those of this website or its editors.