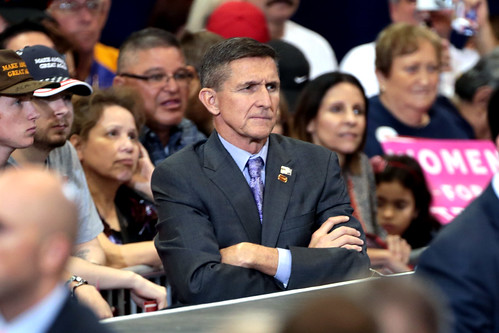 PRESIDENT TRUMP'S NATIONAL security adviser, Gen. Michael Flynn, was forced to resign on Monday night as a result of getting caught lying about whether he discussed sanctions in a December telephone call with a Russian diplomat. The only reason the public learned about Flynn's lie is because someone inside the U.S. government violated the criminal law by leaking the contents of Flynn's intercepted communications.

In the spectrum of crimes involving the leaking of classified information, publicly revealing the contents of SIGINT -- signals intelligence -- is one of the most serious felonies. Journalists (and all other nongovernmental citizens) can be prosecuted under federal law for disclosing classified information only under the narrowest circumstances; reflecting how serious SIGINT is considered to be, one of those circumstances includes leaking the contents of intercepted communications, as defined this way by 18 798 of the U.S. Code:

"Whoever knowingly and willfully communicates ... or otherwise makes available to an unauthorized person, or publishes ... any classified information ... obtained by the processes of communication intelligence from the communications of any foreign government ... shall be fined under this title or imprisoned not more than ten years, or both."

That Flynn lied about what he said to Russian Ambassador Sergey Kislyak was first revealed by Washington Post columnist David Ignatius, who has built his career on repeating what his CIA sources tell him. In his January 12 column, Ignatius wrote: "According to a senior U.S. government official, Flynn phoned Russian Ambassador Sergey Kislyak several times on Dec. 29, the day the Obama administration announced the expulsion of 35 Russian officials as well as other measures in retaliation for the hacking."

That "senior U.S. government official" committed a serious felony by leaking to Ignatius the communication activities of Flynn. Similar and even more extreme crimes were committed by what the Washington Post called "nine current and former officials, who were in senior positions at multiple agencies at the time of the calls," who told the paper for its February 9 article that "Flynn privately discussed U.S. sanctions against Russia with that country's ambassador to the United States during the month before President Trump took office, contrary to public assertions by Trump officials." The New York Times, also citing anonymous U.S. officials, provided even more details about the contents of Flynn's telephone calls.

Related Topic(s): Intelligence; Leaks; Michael Flynn; Sigint, Add Tags
Add to My Group(s)
Go To Commenting
The views expressed herein are the sole responsibility of the author and do not necessarily reflect those of this website or its editors.