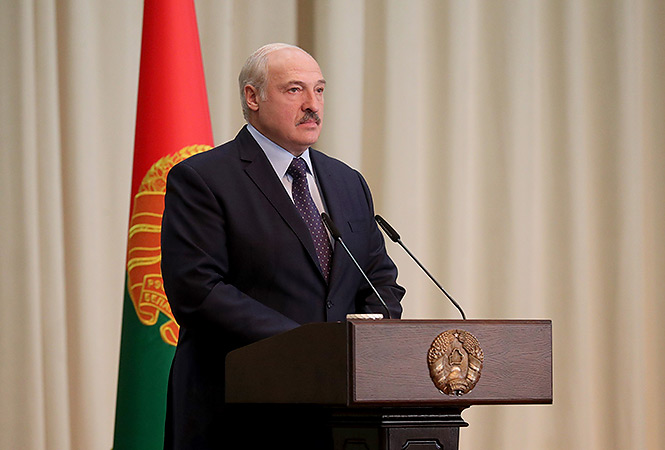 In 2005 Belarus President Aleksandr Lukashenko was dubbed "the last dictator in Europe" by President George W. Bush's Secretary of State Condoleezza Rice. The name has stuck in the West. The U.S. foreign policy establishments pretend that "dictator" is a dirty word to them. They actually only use it for propaganda purposes.

The U.S. has a long history of cozying up to and backing dictators. The U.S. backed the fascist dictator Francisco Franco from the 1936 Spanish Civil War until 1973. Prominent U.S. politicians and corporations helped Hitler rise to power in 1934 and rebuild Germany's military. The U.S. supported the corrupt Ferdinand Marcos of the Philippines from 1965 until 1986; Suharto in Indonesia from 1968 until 1998; Hosni Mubarak in Egypt from 1981 until 2011; and the U.S. continues to support dozens of right-wing and fascistic criminal dictators and archaic evil monarchies today, such as Saudi Arabia.

US presidents from Franklin Delano Roosevelt to Richard Nixon said about Nicaragua's fascistic dictator Anastasio Somoza, "he is a son of a b*tch, but he is our son of a b*tch". The only problem that the US has with Belarus's Lukashenko is that he is not the U.S.'s b*tch.

Lukashenko is a tough Stalinist. A better nom de plume for Lukashenko would be The Last Stalinist of the Soviet Union. Even his secret service is still called the KGB (Komitet Gosudarstvennoy Bezopasnosti). Most Belarusians support him, as was shown by the majority vote he received in the August 9, 2020 elections. He clearly won the election. Stephen Lendman and many others in the alternative media have written about it. His opponent Svetlana Tikhanouskaya is no Joan of Arc as portrayed by Western propaganda. Just like Juan Guaidó is not the president of Venezuela.

Belorussia was the smallest republic of the former Soviet Union, with less than 10 million people. Translated, Belorussia means "White Russia". That is not the same as the White Russians who opposed the 1917 "Red" Bolshevik revolution.

Those anti-revolutionary White Russians of 1917 were mostly Cossacks who enjoyed a very privileged position in Tsarist Russia. Cossacks were borderland defenders of Russia in Ukraine and the Caucasus Mountains. The Tsars gave them titles as dukes and duchesses, and gave them their own land. Few Americans know the history of the U.S. invasion of Russia from 1918 to 1925 on the side of the White Russians. Almost every Russian does though.

Belorussia took its "whiteness" from its historical narrative of not having been successfully invaded by the Mongol Empire in the 13th century, unlike Russia and Ukraine. Belorussia was protected on the east by dense swampy forests. A misstep by would-be invaders found themselves sinking in the swampy quicksand. Belorussian defenders knew the swampy forests like the palm of their hands. The Germans learned that the hard way from Belorussian partisans who raised havoc from behind the Nazi lines during World War 2. After the breakup of the Soviet Union, Belorussia became an independent country, and officially changed its name to the Republic of Belarus.

Lukashenko was first elected president of Belarus in 1994, before Putin was elected the president of Russia in 1999. Belarus is a small country, which is poor in natural resources. Lukashenko has been a thorn in Putin's side for years, because of his constant nagging for ever more subsidies and lower prices for natural gas from Russia. What Belarus lacks in natural resources it makes up for in agriculture, beef, manufacturing and technology. Belarusians enjoy socialist healthcare, education and modern infrastructure. Russia is its main trading partner, and Germany is its second largest.

Putin complains that Lukashenko has had his butt in two chairs for decades. Lukashenko has half his butt in Europe. He uses Belarus's strategic location for NATO as a bargaining chip to squeeze Putin for subsidies and other concessions. The U.S. has become tired of playing footsie with Lukashenko. The U.S. wants Belarus as another puppet vassal to encircle Russia, just as the U.S. has done with the former Yugoslavia, Poland, the Baltics, Ukraine, Georgia, and elsewhere. The U.S. has ham-handedly overplayed its hand with Lukashenko by using the 2020 election to try to stir up a color revolutions.

Belarus's border with Russia is only a few hundred miles from Moscow. The American people have no national interests in Belarus, but for Russia it could be a NATO dagger pointing at its heart. For that reason, Putin has let Lukashenko swing for the last month in order to teach him a lesson that playing footsie with NATO could end up with him hanging from a street lamp, with a U.S. noose around his neck. Putin has played his hand well, and now he has Lukashenko's full attention and loyalty.

Lukashenko met with Putin in Sochi, Russia on September 14th in a long-planned meeting of the Eurasian Economic Union, as well as a meeting of the states of the Collective Security Treaty Organization, and the Commonwealth of Independent States. Lukashenko can no longer twist Putin's wrist for more subsidies.

Putin looked in control in the meeting at Sochi. He announced his concessions to Lukashenko. Lukashenko tried to look strong as he ate humble pie from his "big brother". On Belarus's homepage Lukashenko is quoted as telling Putin:

"The economy is the basis for everything. Trust me, we have always pursued this course. Some recent events have shown that we should stay closer to our elder brother and cooperate in all fields, including in economy."

In the video below Lukashenko listens respectfully to Putin's concessions without interrupting. He even pretends to take a few notes:

Related Topic(s): Euromaidan; Lukashenko; Nazis; Russia; Soviet Union; Ukraine; Vladimir Putin; Yugoslavia, Add Tags
Add to My Group(s)
Go To Commenting
The views expressed herein are the sole responsibility of the author and do not necessarily reflect those of this website or its editors.