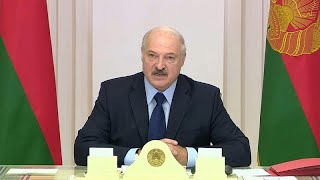 Despite ruling Belarus with an iron fist, most Belarusians support Alexander Lukashenko.

President since 1994, he was legitimately reelected by a 61.7% majority, according to the pro-Western election monitoring group Golos.

It published "data collected by US-backed civic youth organization Zubr 'Bizon' and Chestniye Lyudi ('Honest People'), an election monitoring group established by a group of programmers," Sputnik News reported. More on this below.

Lukashenko's victory margin exceeded the largest presidential landslide in US history since 1820.

Running virtually unopposed in 1820, James Monroe won by an 80% majority.

George Washington, the first US president, won unanimously in 1789 and 1792, receiving all electoral college votes.

Compared to today's money-controlled US political process, Washington did no campaigning, spending nothing to become US president twice.

Inventing the office he held from scratch, he was quoted saying: "I walk on untrodden ground."

He was the nation's larger than life figure, a general, not a politician who preferred to "liv(e) and d(ie) a private citizen on (his Mount Vernon) farm," he said.

He was called on to take the job he didn't want because his stature exceeded all others in the country at the time.

Today's America and world are vastly different than in his day, what no one in his time could have imagined.

Commenting on the state of the nation at the time, Benjamin Franklin was quoted saying that a republic was created if its ruling class ahead could keep it.

He understood that power corrupts and absolute power corrupts absolutely, what happened throughout the years to the present state of things that are far too debauched to fix.

Related Topic(s): Belarus, Add Tags
Add to My Group(s)
Go To Commenting
The views expressed herein are the sole responsibility of the author and do not necessarily reflect those of this website or its editors.