Republished from the Middle East Monitor 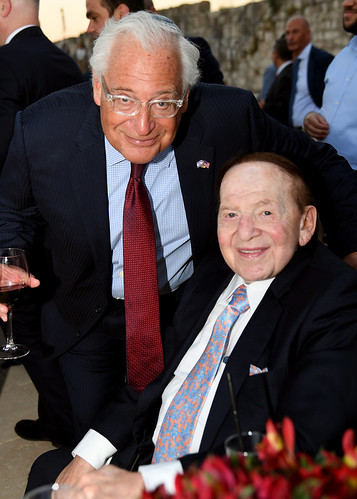 While Palestinians commemorated their ongoing Nakba and perpetual trauma inflicted by Zionist settler-colonialism, the US and Israel lauded each other on the 1st anniversary of Donald Trump's unilateral recognition of Jerusalem as Israel's capital and the US Embassy relocation from Tel Aviv. In the words of US Ambassador to Israel David Friedman, "We created a new shrine in the ancient city of Jerusalem, and we're proud of it."

Last year, when the US and Israel hosted a ceremony to mark that particular collaboration in violating international law and Palestinian rights, Israel Defence Forces snipers were busy a few kilometres away killing and severely injuring refugees demonstrating for their legitimate right to return to historic Palestine.

The international community, meanwhile, continues to demonstrate its disdain for Palestinian rights. There is no point in "rejecting" unilateral transgressions if no measures are taken to stop them reoccurring. This is not to say that the UN and the EU, for example, have taken an ineffective stance. On the contrary, both organisations basically endorse and lend support to the ongoing colonisation of Palestine by the Zionist state of Israel.

Inaction by the international community over Jerusalem enabled Israel and the US to embark upon other measures that annihilate Palestinian political rights. Rejecting US President Trump's decisions taken at Israel's behest has not created any deterrent. The only entity listening and quoting international rejections of US-Israel complicity has been the Palestinian Authority, a body so lacking in actual authority that it keeps grovelling in the international arena in an attempt to salvage its status and, needless to say, it reaps even more failures in the process.

For the Palestinian people, Jerusalem is non-negotiable, as it should be. On the other hand, the PA has exploited Jerusalem to retain its diplomatic visibility within the international community. The slogans ringing through the streets which the PA appropriated temporarily to claim its position in protests which would have happened with or without its approval have not been backed by political action by the leadership. Apart from international conferences about Jerusalem and, more recently, submitting an indictment to the International Criminal Court over the US relocation of its embassy, the PA has adhered to the same framework adopted by the international community; rhetorical rejection of actions that facilitate the colonisation of what remains of Palestine.

Notably, PA Foreign Minister Riyad Al-Maliki cited the anniversary to purportedly claim "protection" of Palestinian rights. Yet, the constant reliance on anniversaries to promote futile initiatives such as seeking recourse at the ICC is proof of how the PA and the international community prioritise pretence above political action. As a result, Israel has been able to carve out additional impunity while the international community, with the PA's approval, persists in fragmenting Palestine and providing opportunities to define itself at the expense of the Palestinian people.

One year since the US Embassy was moved to Jerusalem, Palestinians at Gaza's nominal border have not compromised on their resolve and right to their land in historic Palestine. The Palestinian people have a more universal concept of human rights than the international community will ever have. Indeed, the latter makes a mockery of such rights by barely managing its obsession with changing them into a system of meagre compensation for the victims of abuses, and generous rewards for the perpetrators.

Further Reading: After 71 years, Abu Ibrahim still hopes to return to his home;

Related Topic(s): International News, Add Tags
Add to My Group(s)
Go To Commenting
The views expressed herein are the sole responsibility of the author and do not necessarily reflect those of this website or its editors.