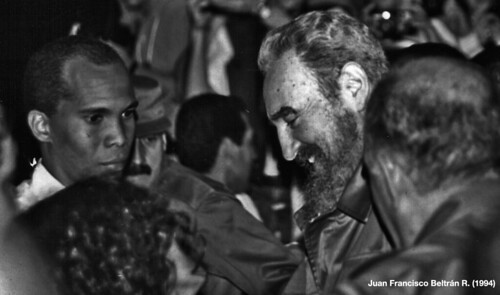 Fidel Castro had chartered a course for Cuba to ensure the island's complete liberation from U.S. colonial influence and interference. Participating at the UN's Sixth Committee during a debate on "Ways to Eliminate International Terrorism", Cuban Ambassador to the UN Ana Rodriguez reminded that the island has been a target for U.S. terror as a result; the latter sponsoring Cuban dissidents such as Orlando Bosch and Luis Posada Carriles, to carry out attacks against Cuba.

October marks the 44th anniversary since the explosion of a Cubana Airlines flight off the West Coast of Barbados, in which 73 people from Cuba, North Korea and Guyana lost their lives. Only the terrorists who planted the bombs, Freddy Lugo and Hernan Ricardo Lozano who were both Venezuelan, were arrested and prosecuted in Trinidad, implicating both Bosch and Carriles in their testimony.

The Venezuelan government was aware of Bosch's activities in Venezuela and allowed him to fundraise for terror activities, on condition that such activities would not take place in the country. While in Venezuela, Bosch also alluded to his involvement in the killing of Chilean economist and diplomat Orlando Letelier in Washington - a crime which forced the U.S. to rethink its overt support for Chilean dictator Augusto Pinochet.

Protected by the CIA, Bosch and Carriles savoured their impunity. The terror attack was communicated to Bosch by Lozano, who telephoned the former, saying, "A bus with 73 dogs went off a cliff."

Declassified CIA documents reveal the CIA had knowledge of the plan to blow up a Cubana aircraft as early as June 1976, and that despite knowledge of the plan, the agency did not alert the Cuban government. Carriles had joined the CIA in 1961 and was trained by the agency in demolitions, while also becoming a paramilitary trainer in the same decade. By 1974, the CIA had terminated Carriles's recruitment, although he retained a role as informant until 1976.

U.S. double standards when it comes to terrorism has much to do with its interpretation of democracy, and how the concept can be used to facilitate exploitation and power. A country deemed undemocratic merely for following a different system of politics and governance, such as Cuba, is subject to U.S.-backed terror in the name of democracy. In this way, the U.S. government exempts itself and its actions from the terror classification.

The Cubana Airlines explosion took place within a context of perpetual U.S. sabotage against Cuba. Since 1959, the U.S. applied different tactics to defeat the Cuban Revolution - 5,780 terror actions against Cuba were carried out by the imperialist power between 1959 and 1997, which include bombings, biological warfare, economic sanctions, and support for paramilitary groups. While the Bay of Pigs invasion will remain known as the most overt CIA-backed operation to bring down Fidel Castro, the U.S. is embroiled in a process of destroying a revolution in a country which has also revolutionised education and which will not willingly subjugate itself to external pressure.

Noam Chomsky once observed that Cuba has a target of U.S. terror more than any other country. Argentine revolutionary Ernesto Che Guevara, who participated in the Cuban Revolution alongside Fidel, made it clear that Cuba would not give in to U.S. exploitation, as other countries in the region did. The U.S. chose the sabotage route, allowing the CIA to participate in covert activities aimed at destabilising Cuba, including permission to assassinate Fidel, given the agency's constructed impunity and unaccountability through plausible deniability; the latter protecting the U.S. government from any future disclosure of the CIA's actions.

Bosch and Carriles died without facing justice for their terror activity against Cuba. Meanwhile earlier this year, the U.S. mulled placing Cuba on the list of state sponsors of terrorism primarily for diplomatically supporting Venezuelan President Nicolas Maduro against U.S. subversion in the country. Since the revolution, Cuba has maintained its internationalist, non-violent approach to politics, unlike the U.S., which only understands power in terms of force and subjugation. The Cubana airliner terror attack must be remembered in terms of lives lost and bereaved families. Politically, like other CIA-backed actions against the island, the anniversary is also a reminder of how Cuba's revolution has withstood in the face of U.S. violence.

Related Topic(s): Cuban Embargo, Add Tags
Add to My Group(s)
Go To Commenting
The views expressed herein are the sole responsibility of the author and do not necessarily reflect those of this website or its editors.