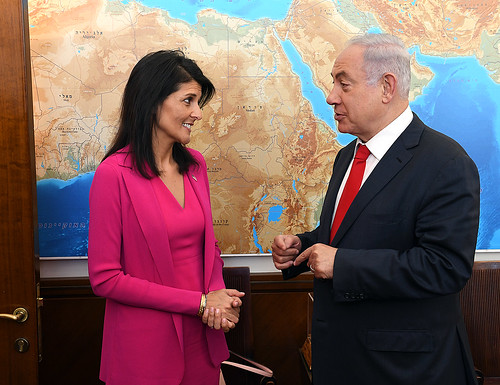 Nikki Haley has told Israel Hayom that, "I really didn't know that much about Israel," an admission which did nothing to hinder her stint as US Ambassador to the UN from becoming an opportunity to be the colonial state's main cheerleader. Or, as she puts it, to stand up against alleged political bullying; being bullied as a child, she says, helped her identify with Israel. "Every experience I felt that Israel was having in the UN was an experience I had felt." Of Palestinians bullied by the international community as well as Israel and its supporters like herself, it must be said she uttered not a word.

Haley's contempt for the UN is a focal point of the interview: "It is interesting to see what the UN has become, because if the UN is not careful, it will become the operational point for all the bad actors." Yet despite her spin on the organisation, for which she blames "many countries," Haley is accurate in describing the monopoly of the US and Israel therein.

For Palestinians, the UN has long had such a bad reputation. Each decision manufactured by the organisation has only contributed to the loss of Palestinian land and the ongoing displacement of the Palestinian people. US President Donald Trump has actually accelerated the UN's complicity when it comes to the disintegration of Palestinian rights. For all the alleged anti-Israel bias about which the US and Haley are vociferous, the UN has proved consistently that when it comes to essential matters, it continues to prioritise the security narratives of the settler-colonial state above the Palestinian people's right to resist colonial domination by any and all means available.

Nikki Haley: 'Israel should not be worried about deal of the century'

Criticism of the UN by the US and Israel is simply opportunism to expand the growing trend of normalising human rights violations at an international level. During her stint as Ambassador at the UN, Haley made it her personal ambition to attack every single opportunity for Palestinian advancement, no matter how small it might have been. While her influence alone is certainly not the main reason why the UN is becoming more overt in its denunciation of Palestinian rights by supporting Israeli demands, the Trump administration has managed to bring to the fore what previous presidencies preferred to be kept hidden.

As a result, the two main pro-Israel lobbies have contributed to a unified international vision of supporting human rights violations against the Palestinians; it is only the strategies which differ. The US and Israel are working together to eliminate all traces of Palestinian political visibility and validity; this scheming is in turn supported by the UN in terms of persisting in locking the Palestinians into a humanitarian project while allowing the US and Israel every opportunity to exploit their plight.

"Israel's best friend," as the interviewer describes Haley, exposes the face of US diplomacy. Knowledge of colonialism is no longer a prerequisite to take up a post necessitating an understanding of how Israel an influential and international enterprise has managed to embark upon a cycle of dispossession of the Palestinian people without ever attracting anything more substantial than condemnations at a global level.

Indeed, Israel couldn't have had a better partner than Trump for its current plans. Expertise at circumventing international law, in addition to US belligerence and international apathy with regard to the Palestinians, is the perfect formula for Israel's impunity to flourish unhindered. Giving Haley all the credit for the current oppression negates the historical process that turned Palestine into an international political commodity. However, former Ambassador Nikki Haley has certainly facilitated Israel's normalisation in terms of how its political intent is able to subject international agendas to its colonial will and expansion. Haley's UN legacy adds to the international conspiracy against the Palestinians.

READ: Forced postponement of the deal of the century

Related Topic(s): Palestine, Add Tags
Add to My Group(s)
Go To Commenting
The views expressed herein are the sole responsibility of the author and do not necessarily reflect those of this website or its editors.