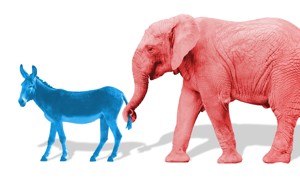 Democrats can save the Republican Party
(Image by theatlantic.com)   Details   DMCA
>

The retaking of the House by the Democrats will soon allow them to exercise checks and balances and stop the Republicans from going down a slippery slope. Otherwise, the party would have slid into complete self-implosion as they blindly but willingly followed Trump's chaotic political agenda. During the past two years, Trump and his party have rendered the country a severe disservice with massive domestic and international implications. Partisanship became the norm, and the party's abdication of its oversight role over the executive branch has allowed Trump to pursue policies that defy logic and reality, to the detriment of the United States.

With the exception of a few Republican Congressmen who decided not to seek reelection, the vast majority of the Republican party leadership have become totally subservient to, if not enslaved by, the President. They have remained largely silent about his regular maligning of our friends and allies, his racism and outbursts against people of color, his sweeping opposition to immigration, his Islamophobic attitude, his defiance of climate change, his deliberate polarization, his repeated lies and misleading statements, his shameless attacks on the press and any perceived or real opponents, his fear mongering, and his vulgarity and demeaning attitude toward women.

Yes, the Republican party lost its soul, and two more years in control of both the House and Senate would have caused irreparable damage to the US both internationally and domestically. Ironically, the Democrats' victory may well pull the Republican Party away from Trump's spell and save it from its own self-destructive path.

I believe that it will be a major mistake for the Democrats to even contemplate the impeachment of Trump, not only because it will not pass the Republican Senate, but because it will further galvanize his base and allow the Republicans in the House and Senate to regroup behind the President.

The fact that the House will soon be under Democratic control offers Republicans the chance to redeem themselves by working across the aisle to begin the process of healing a dangerously divided country. Under any circumstances, however, the Democrats must focus on four major crises facing the nation that have a direct and indirect impact on every American.

Making healthcare a central issue in the mid-term election was a winning strategy, precisely because healthcare is a fundamental issue for every American. Healthcare, to be sure, is a basic human right that must be granted by either the federal government or the state. It is nothing short of a travesty for any American, regardless of age and preexisting conditions, not to have accessible and reliable healthcare.

The Democrats must remain relentless in pushing for comprehensive healthcare legislation, particularly revising the Affordable Care Act in the context of universal healthcare, and invite the Republicans to support it. The prospect for success and the potential for failure, should the Republicans decide to oppose it, will serve the Democrats' interests come 2020.

The source of America's greatness is in its people and their backgrounds, sets of beliefs, cultural riches, diversity, and differing resourcefulness that immigrants bring with them, which together made America not only great but unique. The Democrats must present all-encompassing immigration laws that will address the millions of undocumented immigrants, DACA, asylum seekers, and the regular flow of legal immigrants, and finally pass the DREAM Act.

Regardless of Trump's disdain for immigrants of color, the demographic composition of America is changing. Black, Hispanic, and Asian-Americans will become a majority within three decades, a trend that Trump cannot stop, and his embrace of white supremacists is a stain on America. The Republican Party must make its choice, and the Democrats must press for what America stood for -- as the country of immigrants.

It is time for the Republican Party to wake up to the indisputable scientific evidence that climate change is a reality that must urgently be addressed. Indeed, only totally ignorant and morally corrupt people do not recognize that climate change is already upon us. The unprecedented ferocity of fires (particularly recently in California), hurricanes, tsunamis, rising sea levels, and pervasive destruction of the coral reefs are a direct result of climate change, and is obvious for all to see.

Related Topic(s): Climate; Democrats Progressive; Healthcare; Immigrants; Partisanship; Party Politics Democratic; Party Politics Republican; Politics, Add Tags
Add to My Group(s)
Go To Commenting
The views expressed herein are the sole responsibility of the author and do not necessarily reflect those of this website or its editors.