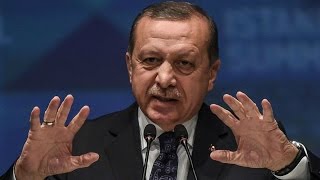 The egregious violation of freedom of the press in Turkey has reached a mammoth proportion that places Turkey among the most oppressive nations for journalists. It is sadder than sad that the US and the EU, who champion free press as one of the main pillars of democracy, have largely left Turkey's President Erdogan free to crush not only free press, but also freedom of speech and peaceful demonstrations.

The irony here is that Turkey, as a member of the North Atlantic Treaty Organization (NATO), has violated every provision of NATO's founding treaty regarding human rights. Indeed, each member state is required to fully adhere to "...safeguard[ing] the freedom, common heritage and civilization of their peoples, founded on the principles of democracy, individual liberty and the rule of law." To be sure, Erdogan has given himself license to mock these principles without any noteworthy rebuke from other NATO members.

It is time to consider kicking Turkey out of NATO, regardless of how difficult and complicated this far-reaching measure may be. Turkey has long since forsaken Western values while becoming an increasingly zealous Islamic state. Indeed, contrary to Erdogan's manipulative narrative about Turkey's presumed democracy, the country under his watch is governed by an authoritarian regime that has no place among Western democracies.

The violation of free press and the systematic undermining of human rights demands that the West reevaluate its relationship with Turkey and stop searching for excuses to justify its self-conceit about Erdogan's outrageous behavior. Here is a dossier of Erdogan's gross violations of freedom of the press and his suppression of democratic values:

Turkey today has become the global leader of incarcerated journalists. The Stockholm Center for Freedom, a Sweden-based advocacy agency, reports that as of July 2017 the Turkish government has arrested 228 journalists and convicted an additional 25. Reporters Without Borders' 2017 World Press Freedom Index ranks Turkey 155 out of 180 countries.

President Erdogan has all but silenced any media outlets that have attempted any scrutiny of his policies, particularly his crackdown on anyone whom he perceives to be an enemy. As such, he has systematically denied the Turkish public any unbiased source of information from domestic newspapers, radio, and television.

He uses the criminal justice system to prosecute journalists on false charges of terrorism, insulting the president, or fabricated crimes against the state. Many journalists have been charged and convicted for reporting that the government is supplying weapons to the Islamic State (ISIS), when in fact the government did just that, and turned a blind eye to ISIS' oil being smuggled into the country.

Erdogan regularly exerts tremendous pressure on various media organizations to dismiss journalists who write anything critical of the government, such as those who worked for the newspaper Cumhuriyet. Investigative journalism is viewed as treason against the state, which has de facto choked off any effort by journalists to investigate any wrongdoing by officials, especially in the rampant number of corruption cases that included several ministers and his own son.

He took over or closed down private media companies, including Feza Publications (parent company of Zaman and Cihan), and in many cases assigned trustees to media organizations, which is absolutely illegal and against Turkey's own constitution, which he labored so hard to pass.

Many of Turkey's business tycoons, who have extensive media holdings, are given major inner-city construction projects in exchange for keeping their reporters in check and forbidding them from publishing critical commentary about the government.

He regularly targets journalists and media outlets associated with the Gulen movement, which the government accuses of being a terrorist organization. Human Rights Watch reported that he closed nearly 170 media organizations and publishing outlets under the state emergency law that was enacted following the failed military coup in July 2016, severely undermining every aspect of human rights and the rule of law.

Erdogan targeted Kurdish journalists in particular and pro-Kurdish political activists who have expressed support for Kurdish rights, including prominent academics and mayors, accusing them of having links to the Kurdistan Workers' Party (PKK). In fact, none of the accused committed any wrongdoing--their arrests were arbitrary and lacked any semblance of legitimacy.

He stifled not only freedom of the press, but free speech in general. According to the Twitter Transparency Report, Erdogan demanded that Twitter remove any offending posts. Of the 33,593 Twitter accounts reported in 2016, over 23,000 were reported by the Turkish government, more than all other countries put together.

Fearing retribution from the police, even private news outlets no longer dare to report on anything which is not to the liking of the government -- including demonstrations or clashes related to the Kurdish problem. Self-censorship by journalists has become a common practice, while quietening colleagues who try to protect the basic ethics of journalism.

Related Topic(s): Censorship; Democracy; Media; NATO; Reporters; Rights, Add Tags
Add to My Group(s)
Go To Commenting
The views expressed herein are the sole responsibility of the author and do not necessarily reflect those of this website or its editors.