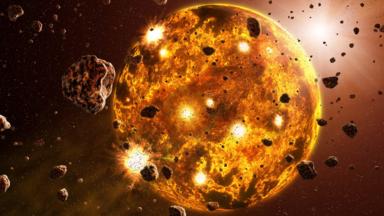 How long will life survive on planet Earth?
(Image by bbc.com)   Details   DMCA

Consequently, the CIA, FBI, NSA, Democrats, John McCain and Lindsey Graham, and the presstitute media boxed Trump in by portraying him in collusion with Russian President Putin to steal the election from Hillary. Marches worldwide were instantly choreographed, and there were constant and escalating accusations portraying Trump and his associates as puppets on Putin's string. Lists were made of Internet media sites that took exception to Washington's wars and dangerous provocations of Russia, China, and Iran.

I was astonished to see the liberal/progressive/left line up with the CIA against peace and with globalism and Identity Politics against the working class. The liberal/progressive/left has turned against heterosexual white males and transformed the working class from a victim group into alleged victimizers of women, blacks, homosexuals, and Muslim refugees. The American left has degenerated into the Identity Politics that originated with Zionism. (See for example the article by Eric Draitser, the host of CounterPunch Radio.)

The political left, once a force for peace, has transitioned into a force for war, as war is the likely outcome of the high level of tension that now exists between the US and Russia. By helping the CIA handicap President Trump and prevent him from reducing these tensions, the liberal/progressive/left has responsibility for the impending danger.

Related Topic(s): Methane; Politics; Presstitutes; Putin; Scientists, Add Tags
Add to My Group(s)
Go To Commenting
The views expressed herein are the sole responsibility of the author and do not necessarily reflect those of this website or its editors.