As is very well-known, we as a nation are now standing at a cross-roads in our history, caused of course by the COVID-19 epidemic. If certain estimates of its eventual scope come true (and to be sure, these estimates are at the far right-hand end of the Bell Curve for the count), we are standing on the precipice of as many as 60,000,000 cases. (Sounds like a lot in raw numbers, and it is, but that number is less than 20% of the U.S. population.) This, if the projected death rate is correct, would produce 600,000 deaths. As is widely agreed to (outside of the Trumpublican© inner sanctum --- see Fox"News" --- of course) the major cause of this horrible potentiality in this country has the been the dreadfully slow response of the Trump Administration to the threat, which has been known since China first announced the outbreak and its then-extent at the end of last year.

This response, or non-response, has a variety of causes. Not necessarily in the order of importance, they include:

* Trump's determination to get rid of any governmental element that had Obama's name on it. So the White House office for dealing with potential global pandemics, formulated after the Ebola-virus outbreak of 2014 (which, as it happened, was contained, with no cases being found in the United States) was closed down.

* Following Trump-principal-policy-adviser-in-the-early-days Steve Bannon's dictum to achieve the "Deconstruction of the administrative state" as one of the top priorities of the Trump Administration, significant chunks of the elements of the Centers for Disease Control were eliminated.

* Trump's response to the early news of the developing epidemic in China was the imposition of a travel ban of certain persons coming from China. Now we all know how much Trump loves travel bans, but this one seems to have had little impact on the spread of the disease in the United States (even though he and Hannity, et al continually boast about it). For if it were so successful, how come the number of domestic cases is rising rapidly, travel ban(s) or no? (Of course, Trump has just announced his Europe travel ban --- for Europeans, not U.S.--- except for the UK [and didn't bother to pre-inform the U.S.'s European allies]). Apparently, he is ignorant of the Eurostar train and the cross-channel ferries, and also that Ireland, an island, is part of the EU, not the UK, but that is another matter.)

* Trump's focus on the chances for his re-election chances and his wish that the impending epidemic would just go away or preferably never get to the U.S., apparently was a major reason why there was no early emphasis on the development of test kits and why the U.S. refused the offer of them from the World Health Organization. Apparently Trump, at least at a gut-level, knew how much negative impact the possible high numbers and their many ramifications could have on his re-election chances. And so, came: blaming everything on Obama; the whole "hoax" thing; and how the Democrats of the "fake news" media were using it, and blowing it up, just to get at it him. (Trump's life-long central essence of victim-hood plays into this big-time.)

* But then, and it is very important to note this, joining this witches brew of failing to deal directly and correctly with the impending disaster of a major epidemic is the long-time, well established Republican (and note here that I am using the word "Republican," not "Trumpublican©") opposition to anything that smacks of "big government," that is government that can make life better in one way or another for the vast majority of U.S. It goes back to the time of Reagan. For Reagan famously said in 1981, after he was elected President: "Government is not the solution to our problem, government IS the problem." 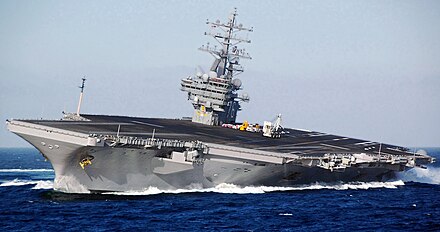 USS Reagan tipping over, just like the President was doing in his second term (but his was covered up, unlike that of the ship).
(Image by (From Wikimedia) M. Jeremie Yoder, Author: M. Jeremie Yoder)   Details   Source   DMCA

Steven Jonas, MD, MPH, MS is a Professor Emeritus of Preventive Medicine at StonyBrookMedicine (NY) and author/co-author/editor/co-editor of over 35 books. In addition to his position on OpEdNews as a "Trusted Author," he is a Senior Editor, (more...)
Related Topic(s): Authoritarianism; Federal Agency FDA; Government Incompetance; Hitler; Trump Apologists; Trump Attacks Media As Enemy Of The People; Trump Attacks Obama; Trump Campaign; Trump Presidency, Add Tags
Add to My Group(s)
Go To Commenting
The views expressed herein are the sole responsibility of the author and do not necessarily reflect those of this website or its editors.