The last national elections produced what passes for a "landslide" (winning by about 8 points overall) in the United States. In terms of seats, the Democratic Party came roaring back in the House. It would have done even better if it had not been for Repub. gerrymandering in certain states. And of course, it was only able to limit the Repubs. to a "modest gain" in the Senate because of the well-known "bequeathed to us by slavery" nature of that body. But, as for the Republicans, if anything the party as a whole, in the Age of Trump, moved further to the Right. This is the result of what I have been calling the "Rightward Imperative" of the Republican Party for some time now.

March for Choice in Dublin On Saturday 29th. September 2012. Just imagine. This is now Catholic Ireland. In the U.S. the Christian Dominionists are on the march, right back to the 16th century.
(Image by infomatique)   Details   DMCA

Presently, this imperative has led the nation to A) in Ohio the passage of a law that would criminalize any abortion (no rape/incest exclusion) undertaken after six weeks of pregnancy (at which point many women don't even realize that they are pregnant). And B) the occupation of two of the highest appointive posts in the Federal government, White House Chief of Staff and Secretary of State, by men whose chief qualification for the job(s) seems to be that they are Tea Party Republicans (which is Far Rightist by definition). They would of course be first, Mike Pompeo at State (like his predecessor Rex Tillerson he has no diplomatic experience, and his intelligence/espionage experience was limited to oversight duties in the House). And then there is Mick Mulvaney, first at Budget and now White House Chief of Staff. His chief qualification for his former and present-co job seems to be his Far Right approach to Federal spending.

So how did the Repubs. get here? I thought it once again useful to review that history.

From Hayes to Eisenhower

For most of its existence since the end of Reconstruction following the election of 1876, the Republican Party has been the party of reaction in the United States. In fact, the only reason that Rutherford B. Hayes, the GOP candidate in that disputed election, won, was that he agreed to end Reconstruction, essentially turning over the Southern states to the former slaveholders and the Ku Klux Klan. There was one bright exception to this rule, Theodore Roosevelt. There were two other exceptions, although not on the scale of the great reformer (and imperialist too). One was Dwight D. Eisenhower, who, at the end of World War II did not know to which party he belonged. In fact, Harry S. Truman tried to recruit him to be the Democratic nominee in 1952. "Ike" chose the Republicans and defeated the traditional Republican right-winger, protectionist, anti-labor (see the Taft-Hartley Act [1947]), anti-New Deal Robert Taft for the nomination. 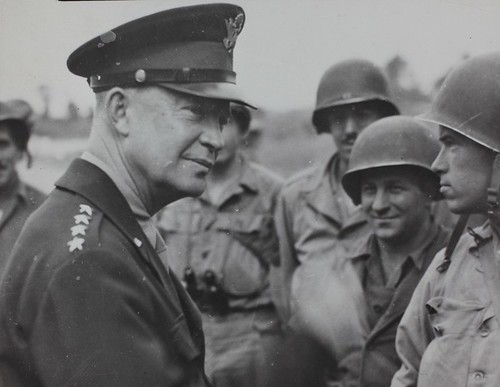 Ike with the troops, just like Trump. Oh I forgot. It's just too dangerous for him to go there.
(Image by San Diego Air & Space Museum Archives)   Details   DMCA

Eisenhower of course won, and made no efforts to go after the central elements of the New Deal. In fact, he supported high marginal tax rates on the wealthy which partly fueled the greatest growth that the US economy has ever had. He also created one of the largest public works programs the US has had, the Interstate Highway System. Eisenhower also famously warned of the military-industrial complex, and not-so-famously warned of a "small group of Texas oilmen" who, if they took over would do great harm to the country, and also said in no uncertain terms that the atomic bomb should never have been dropped on Japan.

From Goldwater to Reagan

But then, first in the 1960 Presidential election, came that bundle of contradictions, Richard Nixon. He was an avatar of Joseph McCarthy, a virulent anti-communist abroad (who nevertheless opened the door to China) as well as an expander of the war on Viet Nam. And he was the inventor of the Republican "Southern Strategy" openly moving into the Southern racist politics that the Democratic Party had left behind when it got behind the Civil Rights Movement in the 1960s. But he was also the promoter of massive environmental protection legislation and, if it hadn't been for Watergate, would have ushered in a true National Health Insurance program in his second term.

But the Taftites never gave up. They did manage to nominate Barry Goldwater in 1964 (Goldwater had famously voted against the Civil Rights Act of 1964) and in the 1970's began the "clean-out" of the (relatively) liberal wing of their party, beginning with the last major "big-government" voice in it, that of Nelson Rockefeller. And they did this, back then, and all the way down to the present, through the Primary System. And that's where the Rightward Imperative in the Republican Party was born.

Although comprising an overall minority in the country, far right-wing voters are concentrated in the Republican Party. And they came to dominate the Republican primaries, meaning, of course, that Republican reactionaries always had a better chance of winning their party's nomination at any level than did liberals. And so, within the Republican Party the "Rightwing Imperative," to win the nomination, was born. And so too, did the party eventually end up with the Louis Gohmerts, Steve Kings, and Jim Jordans of this world.

In 1976, Ronald Reagan lost the nomination to Gerald Ford, who, believe it or not, was a "moderate" Republican like in many ways (noted briefly above) Nixon was. But Reagan, running against another "traditional Republican," GHW Bush, in 1980, drove to the Right and won the nomination. Drove to the Right, you might ask. Well, for one thing it was Reagan who began the open alliance between the Christian Right and the Republican Party (although to be sure Nixon had flirted with it). For another he came down even harder in using the Southern Strategy (with code words --- "dog whistles") than Nixon had.

And so, Ronald Reagan truly initiated the historical stream of GOP-led right-wing reaction which we now see in front of us, every day. For example, on racism. The first campaign stop that Ronald Reagan made following his nomination for President by the Republican Party in 1980 was to the tiny hamlet of Philadelphia, MS. The village is significant historically only because it is the place that three northern civil rights workers were murdered by a white gang, including members of law enforcement, in the "Freedom Summer" of 1964. Nothing outright, but very symbolic to those Southerners who took note of such things. That was followed by his usage of racist terms, during his Presidency, like "welfare queen" and "young bucks." Such epithets and actions came to be known as "dog-whistles," because they were not openly racist. It came to Trump to take the hood off.

But why did this happen and why has the Party been moving inexorably rightward since the Reaganite takeover? Why are they now a party that runs on racism, homophobia, religious bigotry (on the matter, for example of religious belief in when life begins), creationism, sexual repression (abstinence only), and etc.? Don't they have real policies concerning the economy (other than cut taxes, cut taxes, cut taxes, and deregulate), the health care system, and education?

Steven Jonas, MD, MPH, MS is a Professor Emeritus of Preventive Medicine at StonyBrookMedicine (NY) and author/co-author/editor/co-editor of over 35 books. In addition to his position on OpEdNews as a "Trusted Author," he is a Senior Editor, (more...)
Related Topic(s): Giuliani Rudy; Republican Pandering; Republican Primaries; Trump And Putin; Trump Anger; Trump Appointee; Trump Campaign; Trump Con; Trump Conflict Of Interest; Trump Crime; (more...) Trump Foreign Policy; Trump Foundation; Trump Idiot-in-chief; Trump Lack Of Dignity; Trump Liar; Trump Moron; Trump Putin; Trump Racist, Add Tags  (less...)
Add to My Group(s)
Go To Commenting
The views expressed herein are the sole responsibility of the author and do not necessarily reflect those of this website or its editors.