As the McConnell/Charade of an "Impeachment trial" in the U.S. Senate begins, Trump will be remarking on it with some frequency. In understanding where he is coming from and how the thoughts that he will be expressing are formed, it is useful to know how the man thinks. That is how he arranges the thoughts that come into his mind that underlay what he expresses in words, verbal and in tweets (the only two places where he expresses himself, interestingly enough. He writes nothing.). One must note that he does not seem to have the least bit of insight into how his own mind works, about the value system upon which he functions mentally, or what the consequences for anyone other than himself or his immediate family of his think ing and its consequences might be.

To begin with, a bit of background, about which I have written before, which form the foundation upon which his think ing is based. First, from my column on "The Art of the Con ": "For the most part Trump's behavior means the opposite of 'uncontrolled.' It means controlled, planned, from his perspective, in order to get what he wants to get done, done. It just appears to be the opposite, . . . I think that what Trump has mastered most of all over his whole life is The Art of the Con. I think that indeed he is the Greatest Con Man who ever strode across the Face of the Earth. After all, completely unqualified in any conventional sense for the job, he conned his way into the most powerful position on Earth. Didn't he?"

Priority, Golf. This is how he thinks.
(Image by Marvin Moose)   Details   DMCA

Second, from my column "Donald Trump: Loser": "[Trump, deep down in his own mind] is a perpetual loser, he knows it, and the purpose of everything he does is to cover up that fact from himself, from his followers, and from the public at large around the world. No matter now high he gets --- even to the position of the most powerful single leader-of-government in the world, it is never enough." This alone would account for his constant persecution complex and its accompanying Mastery of Whining.

And so, it is these two thought-processes that govern Trump's think ing. Further, he had little true education, obviously doesn't value it, and never has. He even regards the Constitution as written "in a foreign language ." Thus it is likely that he has never read it. (Another indication of that is that he has said that Article Two bestows upon him the power to do whatever he wants to do. I have read the Constitution numerous times and that power is nowhere to be found in it. See Article II, Sect. 2, below.) But he thinks it does, and for him that is what counts. And why? Because in the manner in which he has always been protected from reality and any contrary thoughts (and, heaven forfend, facts), first by his father and then in his own company.

In the latter, he was always the unfettered boss with never anything close to a Board of Directors to answer to. Thus he has always acted in the "I can do anything I want to," a power that he thinks is granted to him by the Constitution. Actually, you're fired" from "The Apprentice," with no recourse for the fire-ee, sums up perfectly how he think s about what he can and cannot do, whether in his company, in a (non-reality) "reality show" on TV, or in the White House.

He really does think that he is the smartest man in the room, whomever else happens to be in the room with him. He really thinks that, in the title of the new book by Philip Rucker and Carol Leonnig, he is a "Very Stable Genius." He really does think that he knows everything, for it was in that fantasy world that he was brought up. While he indicated that he knew nothing about the Pearl Harbor attack that caused the U.S. entry into the Second World War, he also has said that the wheel was invented in the United States, apparently around the time of Thomas Edison. 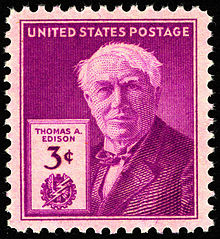 If the Washington Post has recorded (so far) over 16 thousand lies or misleading claims, in Trump's way of thinking the total is zero. He has said that he doesn't lie, just maybe exaggerates a little bit. Indeed, he really does think that, which, combined with his lack of any moral compass, is why he can continue to lie indefinitely. And so for lying itself, defined as "to make an untrue statement with intent to deceive," since in his own mind he is not telling what most everyone else would regard as an untruth, and that is the way, once again, his thought process works, he is not consciously lying.

This relates to his total lack of the moral compass that guides most of the rest of us. Just to take one example from his youth, the draft-dodging arranged with the help of his father just proved how smart he was and knew how to do it. In his way of think ing, morals and ethics didn't play into it, and down to this very day, they never do. Another example, from the Rucker Leonnig book, is that he wanted to propose a change in the current law which prohibits U.S. companies from engaging in bribery overseas. His argument? "Everyone else does it. Why not us?" Again, this is how he thinks.

And then there is the word "hoax," which he applies to the whole impeachment proceeding (and before it to the Mueller investigation). Hoax is defined as "to trick into believing or accepting as genuine something false and often preposterous." In Trump's mind, given how he thinks of Sect. 2 of Article II of the Constitution, all the charges against him are "false and preposterous," and thus constitute a hoax. 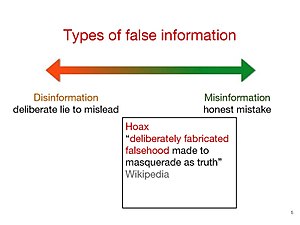 Disinformation vs Misinformation. That is a .hoax,. as in Trump really knows what he is doing as President. (That is, of course except when he is doing something that addresses one of his own personal or political interests.)
(Image by (From Wikimedia) Srijankedia, Author: Srijankedia)   Details   Source   DMCA

Steven Jonas, MD, MPH, MS is a Professor Emeritus of Preventive Medicine at StonyBrookMedicine (NY) and author/co-author/editor/co-editor of over 35 books. In addition to his position on OpEdNews as a "Trusted Author," he is a Senior Editor, (more...)
Related Topic(s): ENABLER; Evil; Hitler; Impeachment; Trump; Trump And Barr; Trump Anger; Trump Apologists; Trump Attacks Impeachment; Trump Banking; (more...) Trump Idiot-in-chief; Trump Presidency; Trump University; Ukraine, Add Tags  (less...)
Add to My Group(s)
Go To Commenting
The views expressed herein are the sole responsibility of the author and do not necessarily reflect those of this website or its editors.