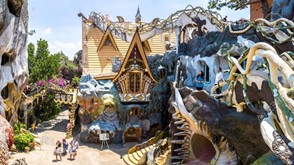 The storming of the Capitol on January 6th by Trump supporters was an acceleration in the unraveling of the American political regime and the fantastic ideology that sustains it. Unfortunately, the likeliest result, in the short term at least, is that the regime will knit itself a tighter coat of control, with the help, sadly, of a large number of professed "progressives" who are rushing to bolster an imperial center that cannot, and should not, hold.

This event, which featured a cast of costumed characters that turned the Capitol into the Mos Eisley Cantina for a couple of hours, was the culmination of five years of farcical politics increasingly unhinged from the ability to think reasonably about, let alone effectively address, the real dangers and injustices accumulating in our country and the world, The ground work of that was decades of the Fox vs. CNN/MSNBC universe of mutually-assured ideological degradation.

That Was the Year That Was

Since the last smack in the face of status quo politics--Trump's election in 2016--Donald Trump has been the not-so-still point in the center of a political-media universe that was all too happy to revolve around, and define itself about, him, at the cost of vast swaths of American people and politicians losing their damn minds.

For four years, his "leadership" consisted of tweeting about how great he was, and what a genius he was, and what wonderful people racists are, and how he was going to drain the swamp, and telling it like it is about the rotten establishment, and how great he was. Somehow this was enough to nourish a cult of personality among a swath of people who saw how great he was because he was so hated by the Clintonite Democratic and RINO establishment they hated, and he was surely going to drain the swamp, and QAnon knew the plan. This, even though he did nothing but surround himself with tax-cutting, ultra-wealthy, American-exceptionalist and uber-zionist swamp creatures who did nothing to keep most people from sinking further into the muck, except give the arms manufacturers and Netanyahu everything they wanted. But he tells it like it is. Delusional. 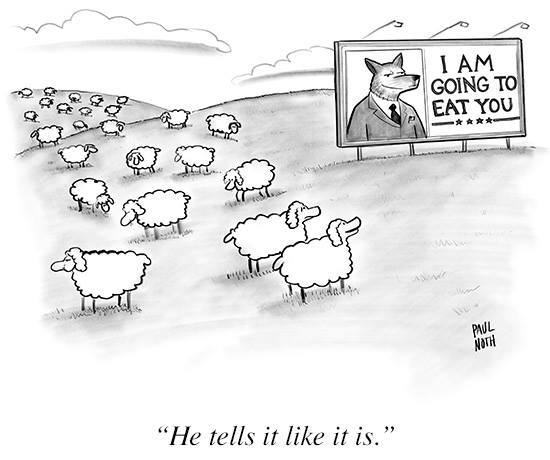 During the same four years, the "opposition" party mounted a #Resistance based on the proposition that Trump was an agent of Vladimir Putin, who, along with Julian Assange and Susan Sarandon, had stolen the election from Hillary by hoodwinking a mere 80,000 people in three states with Buff Bernie memes and true "disinformation" (DNC emails). This was buttressed by a deluge of memes, jokes, and songs about Trump the "Russian whore" who is "busy blowing Vladimir," and charges of treason against the (per Hillary) "illegitimate president" who, "stole," and "knows" he stole, the election. And, of course, the interminable Russiagate/Muellergate saga, which was going to prove the "elemental, existential fact" that Trump was "a puppet, put in power by Vladimir Putin." That fantasy football own-goal was followed by Ukrainegate and impeachment, because Trump was too slow in delivering lethal weapons to the fascists who overthrew the elected government of Ukraine, and because "all roads lead to Putin." Delusional.

Related Topic(s): 2020 Elections; Capitol Riot; Donald Trump; Election Integrity; Fascism; Populism, Add Tags
Add to My Group(s)
Go To Commenting
The views expressed herein are the sole responsibility of the author and do not necessarily reflect those of this website or its editors.