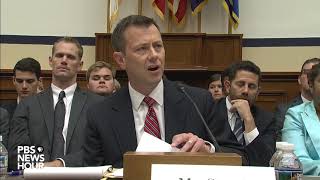 It's another great week for Putin, so much winning! Trump successfully pissed off NATO and cemented his overseas image as the penultimate American idiot, and Republicans have rallied around the Hairflap in Chief and dug in their heels in "preemptively" defending the cretin and his cronies from upcoming collusion and obstruction findings in the Muller report.

Not a single member of congress is investigating the dangers of Putin hacking our next election, but they made sure to rake FBI agent and Trump text critic Peter Strzok over the coals for 20-odd hours. Two weeks ago for 11 hours behind closed doors, then in front of the cameras today.

Today's circus in the House Oversight Committee Hearing ostensible hearing into Hillary's email (!) was such an obvious attempt to discredit the Mueller investigation, even Fox "news" hosts criticized the Republicans for their insane attack on Strzok.

In one of the most appallingly hypocritical moments, Rep. Louis Gohmert absolutely lost his sh*t while questioning Strzok, screaming at Strzok for lying to his wife while having an affair with Lisa Page.

"I can't help but wonder when I see you looking there with a little smirk how many times did you look all innocent in your wife's eyes and lie about Ms. Page?" he screamed.

This tirade, mind you, in in defense of proud p*ssy-grabber and admitted serial adulterer Donald J. Trump. That's how bonkers it's gotten in Putin's America.

The good news here is that it is increasingly difficult to obfuscate and hide the truth from the American people. We know when 2,000 Latino babies are being routed around the country in the middle of the night, for example (and where the hell is THAT oversight hearing??) To paraphrase Rachael Maddow, these crimes are too big to conceal anymore. Too many people know the truth and too many are willing to talk.

Just as this hearing backfired. Strozk came across as measured and intelligent as the GOP interrogators foamed at the mouth over his sexy text messages. And Strozk had an opening statement of his own:

"I understand that my sworn testimony will not be enough for some people. After all, Americans are skeptical of anything they hear out of Washington. But the fact is, after months of investigations, there is simply no evidence of bias in my professional actions.

"There is, however, one extraordinarily important piece of evidence supporting my integrity, the integrity of the FBI, and our lack of bias.

"In the summer of 2016, I was one of a handful of people who knew the details of Russian election interference and its possible connections with members of the Trump campaign. This information had the potential to derail, and quite possibly, defeat Mr. Trump. But the thought of exposing that information never crossed my mind.

"That's what FBI agents do every single day, and it's why I am so proud of the Bureau. And I am particularly proud of the work that I, and many others, did on the Clinton email investigation. Our charge was to investigate it competently, honestly, and independently, and that is exactly what happened.

"I'm also proud of our work on the Russian interference investigation. This is an investigation into a direct attack by a foreign adversary -- and it is no less so simply because it was launched against our democratic process rather than against a military base. This is something that all Americans, of all political persuasions, should be alarmed by. In the summer of 2016, we had an urgent need to protect the integrity of an American Presidential election from a hostile foreign power determined to weaken and divide the United States of America. This investigation is not politically motivated, it is not a witch hunt, it is not a hoax.

"I expect that during this hearing, I'll be asked about that ongoing investigation. During my testimony before these Committees two weeks ago, I was asked a number of questions, including about the ongoing Russia investigation, that counsel for the FBI instructed me not to answer. Consistent with my obligations, I followed the instructions of agency counsel. However, these exchanges generated significant tension with the Majority Members and numerous time-consuming sidebars and discussions amongst counsel.

Kathy never expected a career in radio as a talk show producer. Born and raised in Atlanta, Georgia, Kathy was completing her nursing degree when in 2001 - in an emergency - she was asked to fill in as the producer of Mike's program. Within a few (more...)
Related Topic(s): Congress; Elections; FBI; Investigation; Peter Strzok; Putin; Testify, Add Tags
Add to My Group(s)
Go To Commenting
The views expressed herein are the sole responsibility of the author and do not necessarily reflect those of this website or its editors.