Click Here to Remove All Ads
Go to source. 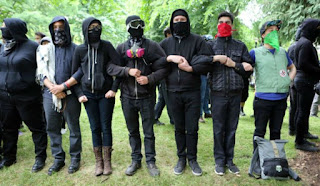 Many Americans, and not only those on the left, were rightfully outraged in August by the sight of hundreds of torch-bearing "white nationalists"--i.e., white supremacists, explicit racists and fascists, the KKK, and Stormfront--marching through the streets of Charlottesville to protest the removal of a monument to a warrior "hero" of the slave system of the Confederacy. And hundreds of counter-demonstrators, from various political and religious tendencies, were on the scene to make that outrage known.

The melee that resulted, which ended in the killing of 32-year-old Heather Heyer, brought to a boil the debate about free speech and aggressive physical violence that has been percolating among various corners of what's called "the left" in this country since the sucker punch of Richard Spencer during his on-the-street TV interview in January.


The question is: In our country today, is it acceptable, even necessary, to deny right-wing, characterizable-as-"fascist," political opponents the right to express their views in public, with whatever means necessary, whether that be legal censorship or preemptive physical force?

antifa tee shirt
(Image by Rob Kall)   Details   DMCA
There is now a significant cohort of people--40% of millennials, according to Pew Research--who answer that question "Yes."

Of course, some of those answering "Yes" would qualify that they only endorse legal and non-violent means of restricting objectionable political "hate speech." But, especially since Charlottesville, the "antifa" groups who brook no such niceties are in the vanguard of this movement, setting the tone and agenda, and challenging the weaker-minded to accept the street-fighting antifa position as the unavoidable logical consequence of that "Yes." Antifa activists not only do not shy from starting fights, they pride themselves on their willingness to do so, and argue that it's only that willingness that will effectively resist the rising tide of fascism and move other left-of-liberals in their direction.

liberal establishment media. 1 "Liberal" is a remarkable word here, since for many decades it's been conservatives and the right who have rejected and vilified organizations like the ACLU that defend the rights of minorities and dissidents to express unpopular opinions. It's now the establishment conservative and to-the-right-of-conservative media that poses as the champion of free speech.

My answer to that question is: "No." I do not agree that right-wing political opponents, even those characterizable as "fascist," should be denied the right to express their views, either by force of law or by physical aggression from groups identified as antifa leftists. I think such a position in the United States today is pernicious in principle and politically dangerous.

In this post, I am going to focus on the physical aggression part of this position. I'll talk about the more general issue of "free speech" in another post.

Left groups and demonstrators have the absolute right to, and I think should, defend themselves and resist any attacks with whatever force they consider necessary and politically appropriate. I am not criticizing defensive force.

There is no "antifa" organization or leadership, so I am not, and cannot be, characterizing or dismissing all actions taken by every group self-identified or identified by the media as such.

In that regard, I find some actions of such groups in Charlottesville, like the defense of non-violent protestors as experienced by Cornel West and reported by Melinda Henneberger and Dahlia Lithwick, to be admirable. Other actions, like the chasing and beating of unarmed protestors just for being there ("Get the f*ck out!"), and, as Leighton Woodhouse observed, "command[ing] photographers not to take their pictures, .. physically block[ing] them from doing so, and if they persisted," smash[ing] their equipment and assault[ing] them." I reject as bullying, dangerous, and politically damaging. 2

So, I'm not using the word "antifa" to refer to any particular group or any particular tactic, but to those who insist on the strategic principle of stopping political expression by those whom they identify as "fascist," by force of law or by physical aggression.

Related Topic(s): Antifa; Free Speech; Free Speech Censored; Freedom Of Assembly; Freedom Of Association; Freedom Of Speech; Political Violence, Add Tags
Add to My Group(s)
Go To Commenting
The views expressed herein are the sole responsibility of the author and do not necessarily reflect those of this website or its editors.