So This Is America?" 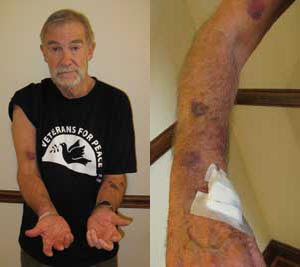 That is the headline from Election Day 1972, I know, but it's also today's headline on das RANT. Listen, there's wrong with recycling old headlines. Please get in touch with me if you hear of anyone named Lincoln getting shot, okay? 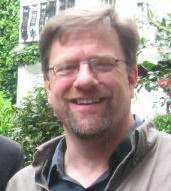 (Image by Unknown Owner)   Details   DMCA
line refers to Ray McGovern. Ray is an acquaintance of my old pal Kevin Swanwick (photo above). I was introduced to Ray by Kevin a couple of years ago and you could not meet a more decent, gentle gem of a man. He happened to be attending a speech that Secretary of State Hillary Clinton was giving last week at George Washington University. He was wearing a T-shirt which bore the image of a dove - not a bat, mind you (That would have been more my style!) - but a dove. He quietly got on his feet and turned his back toward Ms. Clinton. He didn't say a word. He didn't lunge toward her in any menacing way, He certainly didn't hurl a shoe toward her face. He just stood there. It was merely a silent protest against the Obama administration's disastrous policies in Afghanistan. He was then summarily hustled out of the place by a police officer and some guy in plainclothes.

While in custody he was bloodied up pretty good - as the photograph at the top of this piece clearly shows. At the moment he was seized, Clinton was criticizing the foreign leaders who would dare to oppress dissent. As he was being hauled away like a common criminal, he called out for all to hear, a rhetorical question which should resonate throughout the centuries"

Well, it was. Ray is seventy-one-years-old. I'm not making this up. From his Wikipedia biography:

"McGovern was a mid-level officer in the CIA in the 1960s where his focus was analysis of Soviet policy toward Vietnam. McGovern was one of President Ronald Reagan's intelligence briefers from 1981-85; he was in charge of preparing daily security briefs for Reagan, Vice President George H.W. Bush, the National Security Advisor, the Joint Chiefs of Staff, and the Cabinet. Later, McGovern was one of several senior CIA analysts who prepared the President's Daily Brief (PDB) during the first Bush administration."

Hardly the makings of a left wing extremist, huh? As Swanwick remarked on his Facebook page the other day, "The guys who beat him probably have no idea what they owe him." Indeed. So what the hell, you may well ask, happened to the man that would turn him against the very government that he served so long, so well and so loyally? Simply put, Ray McGovern has seen the light. Maybe he found Jesus, who knows? This much is certain: the light he has seen he is now shining on a few uncomfortable truths.

And to anyone who wants to accuse him of being a partisan stooge, Ray's activism started during the Clinton administration. So there!

Ray was quoted three days ago on the website Press TV:

"There was no heckler. I was the person there. I said not a word. I stood silently with my back to the secretary, lest she get the idea that everyone in that whole auditorium agreed with her war mongering policies....I was standing silently, and I was jumped on by a man in a regular suit and then another person in a police uniform. I still don't know who jumped me, but I was taken outside where nobody was watching....For Hillary Clinton to be talking about peaceful means of protest in the same speech which she continued as she watched me directly in front of her being pounced upon and violated, is a little too much to take."

A little too much, alright. If the Secret Service were as on-their-toes as we are always led to believe, they must have been aware of McGovern's presence in the auditorium. Was it really necessary for them to rough up a man is not only well known, but who is a former military adviser to several chiefs executive? What the hell is wrong with these people?

Ray's first major national exposure was five years ago when he confronted war criminal Donald Rumsfeld regarding America's illegal invasion of Iraq. Here is a transcript of that exchange which needs to be quoted in its entirety. It comes to us courtesy of the good folks at Democracy Now.

RAY McGOVERN: And so, I would like to ask you to be up front with the American people. Why did you lie to get us into a war that was not necessary and that has caused these kinds of casualties? Why?

DONALD RUMSFELD: Well, first of all, I haven't lied. I did not lie then. Colin Powell didn't lie. He spent weeks and weeks with the Central Intelligence Agency people and prepared a presentation that I know he believed was accurate, and he presented that to the United Nations. The President spent weeks and weeks with the Central Intelligence people, and he went to the American people and made a presentation. I'm not in the intelligence business. They gave the world their honest opinion. It appears that there were not weapons of mass destruction there.

RAY McGOVERN: You said you knew where they were?

DONALD RUMSFELD: I did not. I said I knew where suspect sites were, and we were--

Tom Degan is a former Green Party candidate for New York State Senate. He writes on a blogsite called, The Rant by Tom Degan. He is the recipient of the Presidential Medal of Freedom.....Okay, he didn't really receive the Presidential Medal of (more...)
Related Topic(s): Military; People; Security; Think Tanks-Advocacy Orgs; Thinking, Add Tags
Add to My Group(s)
Go To Commenting
The views expressed herein are the sole responsibility of the author and do not necessarily reflect those of this website or its editors.