This weekend of 9/11 memorials was filled with absurdities and paradox, much like everything else about the PR phenomenon that is Terrorism, Inc. There was unending sanctimony about 3,000 lost American lives with little acknowledgment of a million Iraqi civilians, tens of thousands of innocent Afghans and Pakistanis.  The bizarre and unconstitutional measures and expenses undertaken by the Bush Administration, purportedly in response to terrorist threats, remain unquestioned by Democratic leaders, and have continued and even expanded under Obama. The half of Americans who don't buy the official explanation for 9/11 events were not denounced as infidels, but simply left out of the festivities this weekend.

Over the last decade, the Press and the Left and the Democrats have failed to rein in a frightful closure of government accountability, a curtailing of civil liberties, a militarization of police and transportation functions, and two disastrous wars. There is plenty of blame to go around. But because I am a scientist, I will focus here on the complicity of the scientific community, and point a finger specifically at the 'Skeptics'.

There has been no independent scientific investigation of the claims made by the Bush Administration about 9/11. Physicists, who might have banded together to blow the whistle on some of the more outlandish implications of the Official Account, have instead remained isolated. Worse, those who sought to publish about 9/11 in peer reviewed journals of science and engineering have been censored, shunted aside to specialized and subsidy journals. One professor lost a tenured job: Prof Steven Jones was dismissed from Brigham Young University several years back for post his 9/11 research on the web.

We should be clear that this debate has been excluded not because the skeptics were wrong, but because they were impolitic. Many, many wrong ideas get published in peer reviewed journals. This is necessary and entirely proper. Peer reviewers understand, by and large, that their job is to promote a high-quality debate and not to impose any kind of orthodoxy. 9/11 is a clear exception.

In July of this year, anticipating the Tenth Anniversary festivities, the Skeptical Inquirer published a cover story purporting to debunk "9/11 conspiracy theorists," as if they were the Jehovah's Witnesses or the Flat Earth Society. The SI article contains some legitimate criticism and some errors. The only egregious thing about the article is its appearance in Skeptical Inquirer. SI is supposed to be an institution that opposes dogma and promotes open inquiry. When "creation science" packages Christian theology as science, SI appropriately exposes that this is not science, but Biblical teaching. When the Petroleum Industry pays scientists to deny the reality of global warming, Skeptical Inquirer is there to set the record straight.

But in the case of 9/11, which is the orthodoxy and who are the skeptics?

All the details behind the mainstream story of 9/11 came filtered through the Bush Administration. This is the Administration that undermined science whenever it was convenient, and whose lies were routinely exposed even in the mainstream press. This is an Administration that promoted an unprecedented (and unconstitutional) expansion of government funding to religious organizations; that expanded the teaching of 'Creation Science'; that shut down research on global warming; that suppressed information about nuclear by-products, chemical toxins and the environmental hazards of 9/11 itself. Yet here is the spectacle of Skeptical Inquirer seeking to build a scientific scaffold under the orthodoxy of the Bush Administration's story about 9/11.

The 9/11 Truth Movement has consistently sought a full and open inquiry and an open scientific debate, while the Bush Administration sought to limit investigation, to prevent any official inquiry, and then, when Congress imposed one, to limit the Kean Commission's access to the most knowledgeable and relevant sources. Kean Commission leaders have come out in articles and books warning us of that they were deceived and stonewalled when preparing their report.

Specifically: The Skeptical Inquirer article focuses on reviving the "pancake theory" for the collapse of the 3 World Trade towers - a theory that was put forth by NIST in 2006, discredited by skeptics, and retracted by NIST in 2008.

The SI article states that "Thermite is simply nott practical for carrying out a controlled demolition, and there is no documentation of it ever having been used for that purpose." The author later retracted this statement after historical examples from the 1930s were pointed out to him.

The SI article states that "Thermitic demolition should have created copious pools of melted steel at Ground Zero, but nothing remotely like this was ever found." Here is a video of demolition workers talking about the melted steel, which persisted for weeks.

The SI article doesn't mention the huge surge in "put" options on airline stocks, purchased a week before 9/11. (The Kean Commission noted this phenomenon, but called off their investigation when it was revealed that purchasers of the options were not Arabs.) 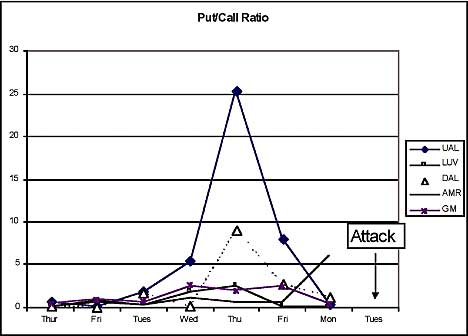 The SI article doesn't mention the flight path attributed to Flight 77, just before plowing into the Pentagon - a path which pilots agree was impossible for a commercial aircraft. Also unmentioned was that this plane "vaporized" on impact, so that no large pieces of its titanium engines or aluminum fuselage could be recovered.

The central idea at the heart of the physical argument about the collapse of the WTC towers can be stated quite common-sensically: When buildings burn, things happen haphazardly, randomly, asymmetrically and unpredictably. Buildings topple sideways because one side gives way before the other side. Destruction is piecemeal over the course of hours or days. For a building to come straight down, the members must weaken simultaneously and symmetrically. This cannot be a natural fire; it requires precision engineering.

The "pancaking" hypothesis assumes perfect symmetry. But even if the collapse is symmetrical and there is no structural resistance whatever, there is still an absolute limit to how fast the building can fall because the mass of each successive floor accumulates gradually, like snow building up on a snowplow. Using Freshman physics, it can be computed that the absolute maximum speed of a "pancaking" collapse is 1/3 the acceleration of gravity. Videos clearly show that the collapse of all three buildings was much faster than this.