My guest today is Gregory Scott, founder of SoundPrint.

Joan Brunwasser: Welcome to OpEdNews, Gregory. I'm willing to bet that most of our readers have not yet become acquainted with SoundPrint. Can you get the ball rolling, please?

Gregory Scott: Sure, thanks for having me, Joan. SoundPrint is a new and unique app that enables users to measure the noise levels of venues such as restaurants, bars and cafes (and others such as subway stations, retail stores, or gyms) to figure out if they are quiet enough for conversation or too noisy to avoid. It also enables users to tell whether the acoustic environment is safe enough for hearing health - after all, noise induced hearing loss is a rising public health issue as more and more Americans are experiencing a form of hearing loss.

When users open the app, they can use our internal built-in decibel meter (for iPhones - Android versions are subjective ratings) to measure the noise level and then when done, they tag the name of the venue they're in and submit to the publicly accessible database for others to help determine which places are quiet or which ones are loud.

It's suitable for many different audiences. My personal mission with the app, because I have hearing loss, is to help those with hearing loss or other sensory disorders (such as vision loss, those with autism, etc.) find quieter venues so they can connect with others. Yet most users have normal hearing and use the app when looking for a spot for a date, business meeting or a dinner with family. Many don't like excessively loud places and use the app as a way to signal to venue managers to request mitigating the noise levels.

We launched last year in Spring 2018 with a proof of concept app, and it has gotten positive coverage, users and submissions. We recently launched the second version of the app and plan on adding more features that we believe will delight our users! When a certain city has enough submissions, we created a curated Quiet List of venues for such particular city and release it to the public. The website to date has about 10 Quiet Cities, but this will soon expand to 18 or so over the rest of the year. So the app is growing!

JB: My son in New York recently emailed me the vox.com article about SoundPrint with the subject line: This app is for you! I'm in Chicago but, at the time, I was in Pittsburgh and downloaded the app. I measured the decibel level at the JCC where I happened to be sitting at the time, and submitted the data while I was waiting for my daughter. It was very easy to do and I got a prompt acknowledgment that my submission was received. It was fun!

But not only fun, I could see how it could be so useful. For me, like for many Baby Boomers, ambient noise makes participating in conversations in public places challenging, to say the least. It's hard not to feel inadvertently excluded in a room full of relentless chatter. And it's not just us Baby Boomers. I'd like to know more about your personal story. Aging wasn't a factor in your case. How did you suffer hearing loss in the first place?

GS: Making the app as simple to use was a high priority for us, especially since it relies on users making measurements and submitting them - we rely on users making submissions.

People tend to enjoy watching the sound level numbers jump around based on the noise they're hearing - its like re-engaging one of our senses!

I lost a lot of hearing when I was eleven months of age due to Meningitis - so I've had hearing loss basically my whole life. But age has also played a factor in ways that aren't expected. When we're younger, we tend to spend most of our time in quieter environments - from going to school most of the day to going home. Our social activities are in quieter environments as well (a friend's house or hanging out on the playground). And then I've noticed as I've gotten older from college to post-college, many social activities were in noisier venues - such as restaurants and bars and the daily commute between loud train stations, so noise in many ways becomes more prevalent on a daily basis as I've gotten older.

Also, the ability to decipher speech in a noisy environment declines with age - even if one hasn't hit their 60's yet. I've definitely noticed the additional cognitive load and energy required to hear in noisier spots! 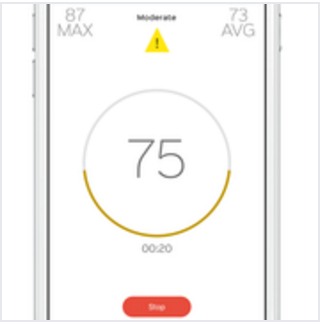 JB: What are SoundPrint Quiet Cities? Who can participate? What if you don't live somewhere that already has a SoundPrint base? How does it all work?

Related Topic(s): Apps; Awareness; Friends; Health; Hearing Loss; Interviews, Add Tags
Add to My Group(s)
Go To Commenting
The views expressed herein are the sole responsibility of the author and do not necessarily reflect those of this website or its editors.