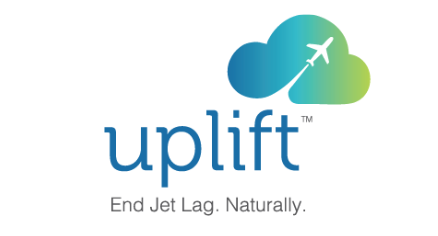 My guest today is Ted Finn, Co-founder and CEO of Uplift.

Joan Brunwasser: Welcome to OpEdNews, Ted. I'm willing to bet that few of our readers are familiar with, or have even heard of, Uplift. Let's rectify that situation. What can you tell us to get the ball rolling?

Ted Finn: Uplift is a startup based in the Cambridge / Boston area. Uplift is a mobile app that guides you to Biohack your body clock and reset it to your new time zone. The Uplift reset effectively and naturally eliminates Jet Lag. My co-founder, Dr. Charles Krebs, is a neuroscientist who modifies traditional acupressure to solve modern day problems. Charles was living in Australia and teaching neurology in Germany and had a problem with Jet Lag, so he developed the Uplift solution to solve his problem.

JB: I've experienced Jet Lag before but I don't really understand how it works, other than making me feel spacey and disoriented for far too long. Can you talk a little more about that before we jump into what a Biohack is and how it helps? I hadn't realized that there was much to be done about Jet Lag, other than learning to live with it.

TF: Jet Lag is extreme tiredness and other physical effects felt after a long flight across several time zones. Jet Lag occurs because your body's clock is still synced to your original time zone, instead of to the time zone where you've arrived. The more time zones crossed, the more likely you are to experience Jet Lag.

The rapid change of time zones affects all of your physiological systems and symptoms include: Insomnia, daytime fatigue, an unwell feeling, difficulty staying alert, and gastrointestinal problems. Medically, Jet Lag is known as desynchronosis, because you are not in sync with your new time or place. According to NASA studies, it can take from 12-24 hours to adjust for each hour of time change to return to peak performance. Jet Lag can ruin business trips and vacations and take valuable days out of your schedule.

JB: So, everyone knows that Jet Lag has the very real potential to screw up travel plans, especially if the trip is shorter. I didn't think there was much recourse, although I remember reading somewhere that symptoms could be minimized through a change in diet pre-flight. You're saying that Uplift can eliminate Jet Lag altogether. That's a big claim that'll be welcome news to millions out there. Tell us more, please, Ted.

TF: Good travel habits make a difference. Dehydration is a critical issue in air travel and diet and other factors affect how you feel when you change time zones. Until now, there was no solution that addressed the underlying effects of Jet Lag, the desynchronosis or misalignment of your body clock. The Uplift protocol resyncs your body clock to your new time zone and neutralizes the effects of Jet Lag / desynchronosis. My co-founder, Dr. Charles T. Krebs, was living in Australia 20 years ago and traveling to Germany each month to teach neurology, Charles had a problem with Jet Lag, so he developed the Uplift solution for himself. Over time, he ended up with over 500 Australian global travelers using the solution. Since we launched the Uplift mobile App, more than 5,000 long-haul trips have been taken this past year alone. Dr. Krebs is the leading expert this space and uses modified acupressure to solve modern day problems, he has published four books and 50+ papers.

Nothing is more valuable than your time when you travel, so losing days to Jet Lag is harsh. Personally, I have over two million air miles and our founding team members have nearly seven million, so we have lived the problem, know our Jet Lag, and the difference that Uplift makes. To spread the word and help more travelers, we have recently launched a free trial for users to experience the difference themselves.

JB: Can you talk a bit more of the backstory about how Uplift works and how it was developed, in a way that my readers and I can understand and appreciate it?

TF: Dr. Charles T Krebs has been modifying acupressure to solve modern day problems for over 25 years. When Charles was traveling from Australia to Germany all those years, he was suffering from Jet Lag and developed the Uplift solution to reset his secondary body clock to his new time zone. We have two body clocks, our circadian rhythm clock is influenced by the sunrise / light and sunset / dark cycle. Our second body clock is the biorhythm or meridian body clock which controls bodily functions. Example: At night, our system detoxifies the liver, brain, and lungs and in the morning, our digestive system kicks in creating a 24-hour cycle. Charles developed a new form of acupressure to move blood flow and energy from one body system to another and reset his body clock to his new time zone. We know how yoga can influence blood flow and energy, and we also know that acupressure can do the same and more. This new form of acupressure developed by Charles combines ancient wisdom with modern science.

There are three steps to use the Uplift mobile App. One - enter your itinerary so Uplift knows your travel times, locations, and transit times. We push this information to the cloud to calculate the time-sensitive solution for your itinerary. The solution changes based on the locations and times or if you flight is delayed. You will use Uplift once when you arrive in your new time zone. Uplift will show you videos and pictograms to find two pressure points. You will find both points and put pressure on them simultaneously for one minute on your left side and then again on your right side. These points correspond to your travel locations and times and redirect the blood flow and energy from your old time to your new time. You are then effectively reset to your new time.

Related Topic(s): Accident; Australia; Boston; Interviews; Inventions; Inventors; Outdoors; Phone Applications; Small Business Entrepreneurship; Software; (more...) Sports; Technology; Travel; Travel, Add Tags  (less...)
Add to My Group(s)
Go To Commenting
The views expressed herein are the sole responsibility of the author and do not necessarily reflect those of this website or its editors.