I admit: It's all speculation.

On April 4th, I wrote on Facebook: "My prediction: the next President of the United States will be someone who is not yet in the race. (e.g., Possible alternative Dem ticket: Joe Biden and Elizabeth Warren.) How crazy am I?"

This wasn't just a wild guess. It was based on a few considered convictions.

The first major conviction is that Bernie Sanders was not going to be Democratic nominee.

Furthermore, Bernie Sanders does not want to play either of those roles. He entered the race, as his advisors acknowledged to the New York Times, "to spread his political message about a rigged America rather than do whatever it took to win the nomination," and he has repeatedly pledged to support whomever the Democrats nominate.

Whatever unexpected and undeniable success his campaign has had, it's a "political revolution" that will be limited to exerting pressure on the Democratic Party and its eventual nominee. One can complain that it's been blocked by electoral hijinks or by the anti-democratic superdelegates, but those sores have been festering for a long time in the party Bernie chose to run in. At this point, if Hillary comes to the convention with one more pledged delegate and more popular votes than Bernie--which she will--she will win fair and democratically square--and any attempt by him to use superdelegates against her would contradict his own erstwhile complaints about them. At any rate, those supredelegates were put in place expressly to prevent anyone like him from becoming the nominee, and are not going to be persuaded, even by wonderful arguments based electoral logic, to forsake their duty. Which of these folks is going to switch to Bernie because polls show he'd do better against Trump in the general? 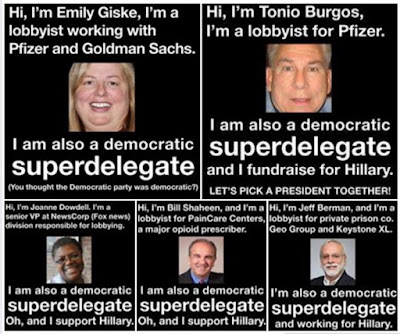 Bernie's not going to turn the superdelegates, and he knows it. He has never been, and is still not, a threat to win the nomination, and the Democratic Party knows it. Stlll, Bernie has run harder, and been undeniably more successful than anyone expected. He's been a stubborn obstacle to Hillary's expected coronation, and this has had some real effects. It has even forced Hillary to making positive noises about "Medicare-for-some." More importantly, it has exposed her deep political weaknesses, stemming from her commitment to establishment politics as well as her unlikeability. Bernie has won a string of impressive victories, and is showing persistent strength among key demographics. He may prevent Hillary from going to the convention with enough pledged delegates to win without superdelegate votes, and that would be a significant political insult to Hillary. But she'll get those votes and get over it.

The Sanders campaign will not stop Hillary, and knows it. It is now focused on getting some progressive platform concessions. Because we can all remember the many times a President has said: "OMG, I can't do that. It contradicts what's in the platform."

With Hillary as the nominee, supported by Bernie, the Democratic Party will once again have the heavily favored candidate of Wall Street, the neocons, and the media, and all will be right with the world. Of course, this will do some damage to the Democratic Party. It will alienate Bernie's supporters, some fraction of whom will refuse to vote for Hillary. But not enough to deprive her of a November victory, or to prise a single cold finger of the ruling class's hand from its grip on the Party and the country. It's become clear that there's a crisis of legitimacy for Hillary, and for the electoral duopoly as a whole, but the plutocracy will be content with having eight more years to prolong the problem.

But what if, for some other reason, Hillary can't win? What's the Democratic Party plan B?

Hint: It's not Bernie.

There are a couple of wild cards in play that could knock Hillary out. One is her health. I've thought for a few years that she was showing some weakness. This has certainly not been visible during the campaign, so it remains a purely speculative concern.

STAY IN THE KNOW
If you've enjoyed this, sign up for our daily or weekly newsletter to get lots of great progressive content.
Series: "Bernie Sanders & 2016 Dem Primary"