I began Part 1 of this two part series by noting that the legal and political walls are closing around Trump. In just the week since the publication of that column, the ring has closed even moreso. As an indicator of that state of affairs, Team Trump has taken to making ever wilder claims, such as his second most prominent mouthpiece after Sean Hannity, Rudy Giuliani, claiming that Mueller and his staff are out to frame Trump. (For what, they don't bother to tell us. But one must suppose that it is some crime for which Trump could employ his claimed right to pardon himself --- pardons, of course, being granted only to convicted criminals.) Giuliani has once again illustrated one of the first principles of litigation one learns when one goes to law school: "If you don't have the facts, argue the law. If you don't have the law, argue the facts. If you have neither the law nor the facts, argue ad hominem."

As the ring tightens --- and given the indictments and guilty pleas already obtained, it would seem to be based on more than a frame-up job --- Trump and the Trumpites creep ever closer, step by step, to establishing a form of 21st century fascism, even within the U.S. Constitutional system. As I noted in part 1, I have previously written much on fascism, especially the potential for its rise in the United States. My book, The 15% Solution: How the Republican Religious Right Took Control of the U.S., 1981-2022, was originally published in 1996. In that "fictional history" the RRR used Constitutional means to eventually establish a very non-Constitutional apartheid state, and most certainly a fascist one.

.Its My Virus..
(Image by Spencer Means)   Details   DMCA

"Fascism," as applied to the Trumpites, is becoming more widely used, from a center-right Democrat like Madeline Albright to a center-left Democrat like Paul Krugman, and a left-Democrat like Robert Reich talks about a coming Second Civil War. As noted, I like to work from definitions. I have offered longer and medium-length versions in previous work.

Here is a still shorter one:

"A single, all powerful executive branch of government, in service of a capitalist ruling class. No independent judicial or legislative branches, at any level. No independent media. Single national ideology, based on some combination of racism, misogyny, religious bigotry and authoritarianism, homophobia, and xenophobia. A State propaganda machine, massively using the Big Lie Technique. May have: full-blown dictatorship, a charismatic leader, engagement in foreign wars, use of the mob/private armies. May have transitional forms.

Most important is that fascism is a feature of capitalism. When installed, it is chosen by the nation's ruling class or the dominant sector of it as the means of control of the state apparatus when bourgeois democratic forms have failed to keep that control, or the danger is perceived that they might lose it because of rising militancy on the part of the middle and working classes against capitalist excesses that they are experiencing.

Now, turning to the U.S., why can one say that the nation is on the brink of fascism? First of all, the President is a proto-fascist. Second of all, as a result of the long-term Republican/neo-liberal policies that have governed the nation since Reagan, but most especially as a result of what is going to happen as a result of current Trumpian/Repub. policy, major elements of the population, on the Left and the center to be sure, but presently on the Right as well, as certain of Trump's working class and petit bourgeois support finds out what his policies are really doing to them, they too will become increasingly restive.

And so here is Trump, becoming more fascist in the 21stcentury sense, almost every day (especially as the Mueller investigation closes in around him). Now, there is still a Constitution in place, and so far, he is limited in what he can do. But he is exerting the powers that he does have under the Constitution evermore vigorously and evermore broadly. First is his claim that there is no Constitutional remedy for dealing with any crimes that the President has committed or might commit other than impeachment, the kill-Comey example being just one of the most prominent. (In fact, the Repubs. would love the Democrats to run on impeachment, while in fact they should run as far away from it as possible. Using "impeachment" as a platform plank will only drive more Trump supporters to the polls. In fact, many Repubs., like Hannity, are egging on the Dems. to do this precisely for that reason.) Trump is claiming not that he is above the law. But rather that he IS the law. (That in and if itself is VERY fascist, by definition. Or monarchical, in the classical sense: see the current Time magazine cover.)

Second there is the pardon-himself claim. Next is the use of the tariff initiative, for which he has Constitutional power. The way he is using seems to make no sense in terms of policy, and even one of his biggest supporters , for reasons of the tax cuts and deregulation, the Koch Brothers, are turning away from him on tariffs and trad e. But it is a way that he can make policy on his own, and so he does it. See the same of course on both the Paris Accords on Climate Change and the Iran Deal. Then there is the use of a segment of the Congress for the purpose of defending himself against various legal difficulties (see Devon Nunes). That is definitely not to be found in Article I.

Now, one can be sure that there is a Fascism Committee within the Administration (note: they wouldn't use that name), that is hard at work developing both strategy and tactics in this regard. Most of its members ae well hidden from prying eyes. Trump himself is simply too stupid (see Tillerson and Mattis) and too ill-informed to develop the strategy himself. He is a past-master, however, at implementing it. So, as they can develop them, there will be other Trump initiatives that either are perfectly Constitutional, like the ever-changing tariffs-and-trade policy, or will start testing he limits in areas not directly covered by the Constitution, like the President cannot be indicted for a crime, even if it was murder (say of a former Director of the FBI).

And of course, with the full cooperation of Mitch "we will do whatever we can to thwart Obama" McConnell, he is filling the federal bench with as right wing a set of judges as can be found, by the likes of the Federalist Society who gave us Gorsuch. Then there is a key feature of fascism historically, that is the infliction of intentional cruelty on population elements set up as propaganda targets: see ICE and the undocumented immigrant population, even those coming to the U.S. seeking asylum. And then supposing that there is some major national disaster, on the scale of 9/11, or bigger, for responding to which Trump would demand greatly expanded powers. Think the Reichstag Fire in the early days of Nazi Germany, and the subsequent Enabling Act.

And then we come to techniques and polices that move in the direction of fascism, as defined above, without being direct assertion of Presidential legal powers. He has expanded the Hitlerian Big Lie technique into what might be called the Trumpian Little Lie technique, showering the air waves with thousands of them. This is being constantly implemented by the introduction of the concepts of "alternative facts" (Conway), and "truth is relative" (Giuliani). He is also moving towards an officially/governmentally sanctioned national ideology: Christian rightist/authoritarian/Dominionist; limitations on free expression (especially when it can be combined with racism, as in the NFL players controversy); in that context, the reintroduction of the concept of "un-Americanism" (with the proposal to deport NFL player-citizens who engage a form of protest he doesn't like); and of course the ever-expanding use of xenophobia. E.g., Steve Bannon has proposed that the U.S. government be shut down if "The Wall," ever so much more important as a symbol for Trump than as a reality in dealing with the immigration problem, is not fully funded. Many more examples could be cited. 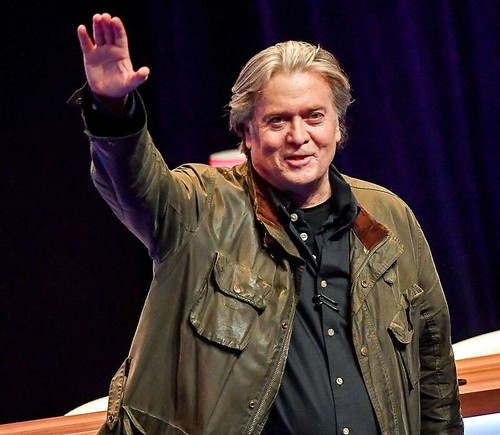 In my view, we are at a critical juncture in U.S. history. It is for no means certain that the Trumpites' drive for unlimited power will be thwarted. The Democrats have no Constitutional powers to do so at this time. Some Repubs. in addition to those mentioned, like Sens. Rubio and Grassley, are beginning to turn away, but not too much and not too many (especially in the House of Representatives). They recognize that the "Trump base" is the "Republican base" and thus they cannot afford to openly/fully oppose Trump for they would further risk electoral defeat.

Certainly, as I pointed out in Part 1 of this series, significant sectors of the Republican wing of the ruling class are beginning to turn away from Trump. But it remains to be seen what they will actually do. At the time that the German President Paul von Hindenburg was reluctantly considering appointing Adolf Hitler as German Chancellor, leading members of the major right-wing party urged him to do so, claiming that they would "be able to keep him under control." We all know how that turned out.

There are two things that stand in the way of a full Trumpian takeover and the further gradual implementation of 21st century fascism. One is the Mueller probe. The other is the possibility of a "Blue Wave" in November (which is certainly not a sure thing). Yes, certainly the Democratic Party is as much a ruling class party as are the Repubs. But, as discussed in Part 1 of this series, it represents a different branch of the ruling class. What the Left needs to remember, in the face of the very real fascist threat that Trumpism represents, is that before Jan. 30, 1933 in Germany, the Communists (the KPD) and the Socialists (the SPD) were at each other's throats, not in combination at the throat of the Nazis. One would be well-advised to heed a warning, Warnung auf Deutsch, (http://www.opednews.com/articles/Warning-Warnung-auch--by-Steven-Jonas-Dictator-Dictatorships_Fascist_Politics_Revolution-170206-430.html) about what was happening in Nazi Germany, written at the time in the mid-1930s. It is time to become afraid, very afraid.

Steven Jonas, MD, MPH, MS is a Professor Emeritus of Preventive Medicine at StonyBrookMedicine (NY) and author/co-author/editor/co-editor of over 35 books. In addition to his position on OpEdNews as a "Trusted Author," he is a Senior Editor, (more...)
Related Topic(s): Class; Class Politics; Democratic; Fascism-Cant Happen Here; Fascist; Hitler; Impeachment; Nazis; Policy; President; (more...) Racism; Republican; Trumpism; Xenophobia, Add Tags  (less...)
Add to My Group(s)
Go To Commenting
The views expressed herein are the sole responsibility of the author and do not necessarily reflect those of this website or its editors.