Trump's foreign policy often seems governed by what he said on the campaign trail. There was even less thinking-through-of-a-problem and coming-up-with-some-rational-solution-to-it back then than there is in his Administration now. And so, one of Trump's repeated ringing statements, which he applied liberally to just about any Obama-Administration initiative he could bring into play, was what a terrible Deal it was. He did promise to leave it when he could --- and so he has . (Iran, as it happens, has promised to stay in the Deal , at least for the time-being, which means that they will abide by the cancellation of their nuclear weapons program.)

Now the Deal, and Trump literally may not know this, because he doesn't, as is well-known, read anything, and according to various high-level members and former members of his Administration he is an "idiot" and a "moron," did deal only with Iran's nuclear weapons program. It did not deal with its ballistic missiles program or its intervention in the affairs of a variety of other Middle Eastern countries. But since the U.S. has its own ballistic missile program and interferes liberally in the affairs of other Middle Eastern countries, that might have been a very tough nut to crack. 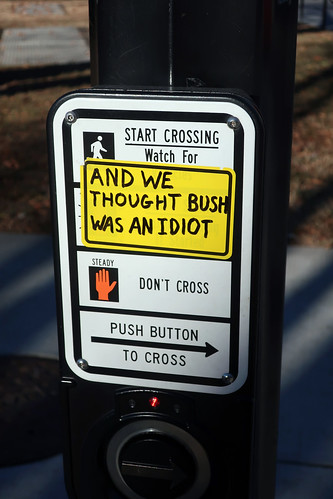 (One has to wonder if Trump could even find Iran on a map --- after all the Navy Negative Ace and Naval Academy graduate who was the Repub. candidate for President in 2008 and has currently dis-invited Trump from his funeral --- but then Trump didn't go to Barbara Bush's funeral --- once placed Iraq on the border of Afghanistan, neglecting the country now at the center of the current controversy --- Iran --- which happens to stand between them.)

In any event, the Deal concerned (and for the other signatories --- the UK, France, Germany. Russia and China --- still does) Iran's nuclear weapons program, which, according to all accounts, has come to an end. It remains to be seen what will happen now with other signatories, none of whom want to bring the Deal to an end. The U.S. will very quickly be re-imposing the sanctions that it had lifted under the terms of the Deal (although some still had remained in place, especially under Trump). As I understand it, the main problem for the other signatories, which might not want to drop their sanctions, is that the U.S. will set up a bunch of secondary sanctions, particularly in the international banking industry, designed to inhibit such an event from taking place.

But the over-riding question here is why are the Trumpites doing this? Iran has been complying with their end of the bargain --- on their former nuclear weapons program --- which was the reason why the negotiations were begun in the first place. If the Trumpites were really concerned about Iran's ballistic missiles program or their Middle Eastern affairs interventions, they could attempt to open negotiations on them. But I have not thought that it's that sort of thing for quite some time. I have been thinking that it is primarily about the "foreign-policy-by-campaign-promise to appeal to the xenophobic/Islamophobic base." However, this morning, on TV, the whole thing --- that is Trump's primary motive for doing what he has done --- became abundantly clear. It w as articulated by none other than the former financier/PR-man/Trump's-communications-director-for-a-minute Anthony Scaramucci. 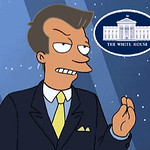 Hardly an expert, or even half-an-expert, on foreign policy in general and the highly complex Middle East region in particular, the Mooch made it clear that that real reason behind the move is "regime change." The real reason why Trump welshed on the deal (as he seems to have done so many times in the course of his career), that is maintaining/reinstating the sanctions on Iran, is to try to make make life so unpleasant for the majority of Iranians that they will somehow get rid of the Mullahs and install, hopefully for him, another right-wing, but this time pro-U.S. right-wing, government. One can only surmise what such a government --- sort of like that under the original U.S. Iranian puppet ruler, the Shah, --- would achieve major U.S. Middle East goals.

They are: 1. Let the U.S. take charge of its oil industry. 2. End Iranian support for groups like Hezbollah that are hoping to end the gradual Israeli policy for taking over the whole of what the Israeli Right describes as Greater Israel (and in the process ejecting all of the Palestinian Arabs to who knows where). 3. Get Iran out of the way of the ambitions of the Saudis to become THE power in the Middle East, in the process crushing the anti-Saudi/Sunni Shiites wherever they may be found. 4. Enable the Turks to completely crush the Kurds, who presently have a physical presence in Iran (and while Iran has made it clear that that piece would never become part of an independent Kurdistan, they don't suppress the Iranian Kurds the way the Turks do the Turkish ones). This would help re-establish a working relationship with the Turkish government under Erdogan which is becoming more fascist-like every day (and boy, does Trump like that sort of thing). 5. Further strengthen the dominance of Netanyahu/Likud in Israel. 6. End Iranian support for the Taliban (which is so ironic, because at the beginning of the U.S. invasion of Afghanistan, the Iranians adopted an anti-Taliban policy). 7. Severely reduce Chinese access to Iranian oil. 8. Russia being an ally of Iran, reduce the Russian presence in the Middle East, particularly as an ally of Assad in Syrai, and possibly get them turfed out of their Syrian Mediterranean ports at Tartus and Latakia. 9. Make the Persian Gulf the sixth U.S. Great Lake. 10. And I am sure that there are other reasons as well.

As for negative consequences for the United States, there are many, of course, being covered by many U.S. observers, even (conventional) right-wing ones like Richard Haas of the Council on Foreign Relations ("Morning Joe," 5/9/18). But one that I haven't heard mentioned yet is that it might lead to major changes in the international banking system, led perhaps by China, holder of one trillion dollars or so of U.S. debt, so as to get out from under the secondary sanctions that Trump intends to impose on any country still dealing with Iran. Citi/Chase/Wells Fargo and the banks of Great Britain and the E.U. don't like them too much (to put it mildly).

As to the supposed "concerns" of the Trumpites about Iran, let's start with ballistic missiles? (You mean like the ones Israel likely already has, except that theirs are already nuclear-tipped?) A minor concern. The U.S. has tons of them. Iranian nukes? That program has been ended, so that cannot be a U.S. concern. Iranian "interference" in the Middle East (which is a joke complaint coming from the U.S.)? Well yes, that would be ended by "regime change" of the type the U.S. will try to arrange, first by totally crippling the Iranian economy. And it's "regime change" that I think this is really all about.

Steven Jonas, MD, MPH, MS is a Professor Emeritus of Preventive Medicine at StonyBrookMedicine (NY) and author/co-author/editor/co-editor of over 35 books. In addition to his position on OpEdNews as a "Trusted Author," he is a Senior Editor, (more...)
Related Topic(s): Hezbollah; IRAN NO NUKES; Iran; Iran Embargo; Iran Nuclear Deal; Iran Russia And China; Israel; Mullah; Palestinian; Taliban, Add Tags
Add to My Group(s)
Go To Commenting
The views expressed herein are the sole responsibility of the author and do not necessarily reflect those of this website or its editors.