As the Trump Presidency seems to be sliding into the mud in the real world (although not in the Alternative Reality of Right-Wing TV and talk radio) and Republican policies (or lack thereof, e.g. the "massive infrastructure program") are becoming increasingly unpopular, there is much talk of a "Blue Wave" coming in the 2018 Congressional elections. It would appear to be fairly certain in the House of Representatives, which is the primary reason why so many Republicans are retiring, even some with safe seats like the sterlingly reactionary Trey Gowdy of South Carolina. (You remember him. He poked around "Benghazi and Clinton" endlessly and found --- nothing. Well, actually because it was a CIA operation gone wrong from the git-go he found nothing that he could talk about publicly.) Recently there has been talk even about the Senate flipping. This is so even though while the Repubs. hold only a two-seat majority most of the seats up for re-election this time around are Democratic, many in normally Red states.

But, let us not count our chickens before they hatch. Major Republican powers, this time around especially some huge donors of both light and dark money like the Kochs and the Mercers have been preparing for this eventuality. First of all, there will be tons of Repub. money from these folks. Second of all, they still have what MSNBC's Chris Hayes like to call "Trump TV" plus that endless supply of right-wing talk radio. Third of all the Koch-funded American Legislative Exchange Council, ALEC, founded in 2007 for the express purpose of taking over state legislatures, so that the Repubs. could control much of the re-districting that occurred in 2010, is still very much in play. And so is the gerrymandering as well as the restrictive "Voter I.D." laws that they have sponsored. (Quite obviously that objective of the latter was not to improve the security of voting. Otherwise, getting a photo I.D. would been made readily available --- as in having camera-equipped photo I.D. offices in every locale and neighborhood --- paid for by the state governments. It wasn't.) And of course, there is the tried and true technique, used by all political parties of motivating "the base" to come out and vote.

We are seeing more and more of Trump/Republican motivation of the Christian Right, the mis-named "evangelical" vote (mis-named because many evangelicals are not Repubs.) Despite all of the Presidents failings when it comes to the "morality" with which the Christian Right is supposed to be concerned, what counts for them when it comes to voting is: the criminalization, on religious grounds, of any choice in the outcome of pregnancy other than theirs; the promotion, through the use of the law (or rather the non-use of the law) to enable discrimination against homosexuals; the enabling of the use of churches (theirs) for political purposes while retaining their tax-exempt status; and the "religification" of education, public and private. 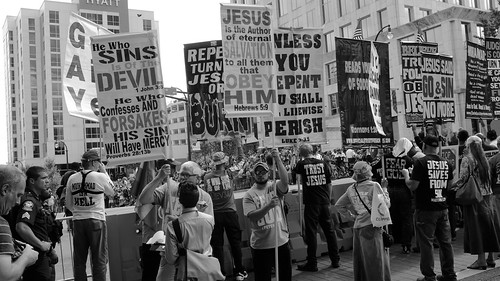 The Religious Right accounts for a relatively small proportion of voters overall, but if they can be motivated to go to the polls in a large proportion, they can control electoral outcomes. This is one strategy that the Trump/Repubs. are relying on this year. As many of my readers know, in 1996 I published a book called "The 15% Solution" which predicted an eventual Repub./Religious Right takeover of the national and state governments, with the eventual development of a fascist state. The name came from a voting strategy developed in the late 1980s designed to enable just such an outcome. Since I believe that it will be in play in the upcoming election, I am devoting the balance of this column to an excerpt from the book (recall that it was published in 1996) that describes it in some detail.

"The 15% Solution" was an electoral strategy developed by the lead ing political organ of the Re ligious Right, the so"'called "Christian Coali tion" (ADL). The "Christian Coalition" was an unabashed, un apolo get ic, and out"'spoken repre sentative of that authoritarian think ing (see also Dino Louis' discus sion of the nature of fas cism in Ap pen dix II) which under their influence was so prominently repre sented in the poli tics of the Re publican Party, begin ning at their 1992 National Con ven tion. The strategy was designed to win elections even when the Coalition's supporters com prised a distinct minority of the eligi ble elec torate. As an early Christian Coalition Ex ecutive Direc tor, Ralph Reed, once said (Harkin): "I paint my face and travel at night. You don't know it's over until you're in a body bag."

Although in later public statements, the Chris tian Coalition made at tempts to cover up or even disavow the strategy, according to its 1991 Nation al Field Director, it was formulated in the follow ing way (Rodgers):

"In a Presidential election, when more voters turn out than [in] any other election you normally see, only 15% of eligible vot ers determine the out comes of that election . . . . Of all adults 18 and over, eligible to vote, only about 60 or 65% are actually reg istered to vote. It might even be less than that, and it is less than that in many states. . . .

"Of those registered to vote, in a good turnout only 50% actu al ly vote. [Thus,] only 30% of those eligible actually vote. . . . 15% of adults eligi ble to vote determine the out come in a high turn out elec tion. That hap pens once every four years. . . . In low turn out elec tions, city council, state legislature, county com mis sions, the per cent age who (sic) determines who wins can be as low as 6 or 7%. We don't have to worry about con vinc ing a majority of Ameri cans to agree with us. Most of them are stay ing home and watching 'Roseanne'" [emphasis added]. (Author's Note: "Roseanne" was a pop ular television program of that time. Current note: Of note in the Trump Era, this show, starring a well-known Trumpite, Roseanne Barr, is making a comeback.)]

As one of the most influential leaders of the Religious Right, Paul Weyrich, succinctly put it (Freedom Writer, Nov., 1994): "We don't want everyone to vote. Quite frankly, our leverage goes up as the vot ing popu lation goes down."

Elected allies of the Christian Coalition worked to make this wish a reali ty. For example, a Governor of Virginia, George F. Allen, elected in 1992 with open Christian Coalition support, attempted by the use of the veto to prevent implementation of Federal legislation designed to make it easier for people to register to vote (NYT).

Steven Jonas, MD, MPH, MS is a Professor Emeritus of Preventive Medicine at StonyBrookMedicine (NY) and author/co-author/editor/co-editor of over 35 books. In addition to his position on OpEdNews as a "Trusted Author," he is a Senior Editor, (more...)
Related Topic(s): 2018; Alternative; Blue Wave; Democratic; Election; Elections; Fascism; Infrastructure; Politics; Republican, Add Tags
Add to My Group(s)
Go To Commenting
The views expressed herein are the sole responsibility of the author and do not necessarily reflect those of this website or its editors.