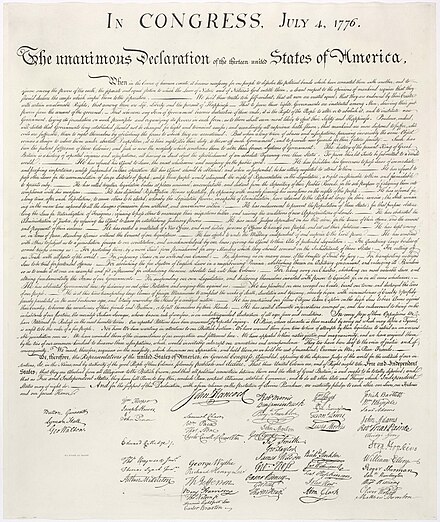 There is at present a movement to achieve a second cultural revolution in the U.S. The first was in 1776. The original Declaration of Independence created more than political revolution-it was also a cultural revolt. The Declaration followed by the Bill of Rights said that the highest value in the United States was freedom of the individual, free from coercion by the newly formed government or by any external force or nation.

The 1776 Declaration is printed in full below to honor it and our founding principles.

The progressive movement, which presently dominates Washington, the legacy media, our schools, and even our military, seeks to revise those founding principles and replace them with "woke" ideology, such as Critical Race Theory. To summarize their intentions, below is a new, unauthorized Declaration of Woke Cultural Revolution. It is placed alongside the original Declaration for easy comparison.

On this Fourth of July anniversary, all Americans should re-read the original, read the new Declaration, and choose!

The unanimous Declaration of the thirteen united States of America, When in the Course of human events, it becomes necessary for one people to dissolve the political bands which have connected them with another, and to assume among the powers of the earth, the separate and equal station to which the Laws of Nature and of Nature's God entitle them, a decent respect to the opinions of mankind requires that they should declare the causes which impel them to the separation.

We hold these truths to be self-evident, that all men are created equal, that they are endowed by their Creator with certain unalienable Rights, that among these are Life, Liberty and the pursuit of Happiness.

That to secure these rights, Governments are instituted among Men, deriving their just powers from the consent of the governed,

That whenever any Form of Government becomes destructive of these ends, it is the Right of the People to alter or to abolish it, and to institute new Government, laying its foundation on such principles and organizing its powers in such form, as to them shall seem most likely to effect their Safety and Happiness. Prudence, indeed, will dictate that Governments long established should not be changed for light and transient causes; and accordingly, all experience hath shewn, that mankind are more disposed to suffer, while evils are sufferable, than to right themselves by abolishing the forms to which they are accustomed.

Related Topic(s): American Center For Law And Justice; American Schools; Americans Elect; Americans Together; Birthday; Declaration; Declaration Of Independence, Add Tags
Add to My Group(s)
Go To Commenting
The views expressed herein are the sole responsibility of the author and do not necessarily reflect those of this website or its editors.