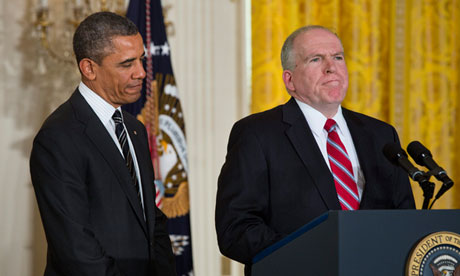 The Justice Department "white paper" purporting to authorize Obama's power to extra-judicially execute US citizens was leaked three weeks ago. Since then, the administration -- including the president himself and his nominee to lead the CIA, John Brennan -- has been repeatedly asked whether this authority extends to US soil, i.e., whether the president has the right to execute US citizens on US soil without charges. In each instance, they have refused to answer.

Brennan has been asked the question several times as part of his confirmation process. Each time, he simply pretends that the question has not been asked, opting instead to address a completely different issue. Here's the latest example from the written exchange he had with Senators after his testimony before the Senate Intelligence Committee; after referencing the DOJ "white paper," the Committee raised the question with Brennan in the most straightforward way possible:

Obviously, that the US has not and does not intend to engage in such acts is entirely non-responsive to the question that was asked: whether they believe they have the authority to do so. To the extent any answer was provided, it came in Brennan's next answer. He was asked:

"Could you describe the geographical limits on the Administration's conduct drone strikes?"

Brennan's answer was that, in essence, there are no geographic limits to this power: "We do not view our authority to use military force against al-Qa'ida and associated forces as being limited to 'hot' battlefields like Afghanistan." He then quoted Attorney General Eric Holder as saying: "neither Congress nor our federal courts has limited the geographic scope of our ability to use force to the current conflict in Afghanistan" (see Brennan's full answer here).

Revealingly, this same question was posed to Obama not by a journalist or a progressive but by a conservative activist, who asked if drone strikes could be used on US soil and "what will you do to create a legal framework to make American citizens within the United States believe know that drone strikes cannot be used against American citizens?"

Related Topic(s): Assassination; Military; Obama Effect; Obama Same As Bush; Obama Wars; Obama_and_Foreign_Affairs; Power, Add Tags
Add to My Group(s)
Go To Commenting
The views expressed herein are the sole responsibility of the author and do not necessarily reflect those of this website or its editors.