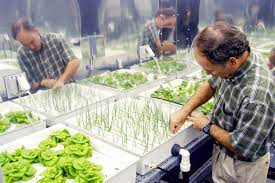 Lake Menomin located in the heart of Menomonie, Wisconsin, is one of the most polluted lakes in the state. Fed by the Red Cedar River, which is continually pumping more and more nitrogen into it, the lake has taken on a permanent green tone from all the algae well-fertilized by the continual flow of the river.

Despite his best efforts, the mayor has been completely powerless to do anything about it because of a lack of cooperation on behalf of the state. They'll work with him to a point as long he conforms to the conventional thinking that it is phosphorus polluting the lake rather than nitrogen.

The problem is that it isn't phosphorus polluting the lake--it's clearly nitrogen.

To the state and the all the farmers upstream producing the pollutant, the source of contamination is going to be phosphorus because this is what they are willing to cut back on.

Nitrogen is the one nutrient no farm can do without.

Cutting back on nitrogen would prove disastrous to the crops growing along up to the river's banks and that is what it all comes down to. There are many lakes in Wisconsin and elsewhere that are algae rich due to a continual leaching of agricultural-originated nitrogen and everybody knows it.

The states aren't likely to address nitrogen leaching and toxicity because every farmer needs it.

Let's take a moment to explain nitrogen toxicity. While it's true that nitrogen is the most major component of our atmosphere--78%, in fact, land-based nitrogen is exceeding what the earth can naturally assimilate through plant material or other means.

The other major problem with nitrogen is that unless plant material is utilizing it, nitrogen just keeps leaching. It isn't filtered out and it never dissipates or breaks down. What this means for lakes is that nitrogen produced primarily by agriculture and, to a lesser extent golf courses, is overfeeding algae. This leads to tremendous blooms resulting bright green water.

At the end of the algae life-cycle it dies, sinks to the bottom and decomposes. The decomposition process uses up oxygen, which in the case of excessive algae bloom results in the suffocation of fish and other marine life.

The first lakes that were affected were the human-made lakes. This is because while they artificially created the water portion an aquatic environment they never put the filter on--the marsh or wetlands.

It's like running an engine without an oil filter.

Jamie Wendland is respected for well-researched political and cultural analysis. A contributor to Russian Pravda.RU and Oped News his articles and commentary also appear in a variety of international publications and journals. Feel free to email (more...)

Related Topic(s): Agriculture; Agriculture And Forestry; Future; Sustainable; Sustainable Development; Sustainable Practices; Toxicity, Add Tags
Add to My Group(s)
Go To Commenting
The views expressed herein are the sole responsibility of the author and do not necessarily reflect those of this website or its editors.

The Depth of Black History-The Bias of Archeology