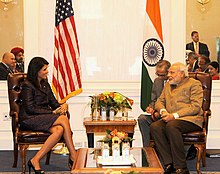 This is the second section of a column that might be better entitled "Gov. Haley: Let Me Introduce You to the Constitution," or "Gov. Haley Continues her Run for the Next Open Republican Nomination for President, Either in 2020 Should the Opportunity Magically [to use Trumps' favorite way of thinking https://www.opednews.com/articles/Trump-s-Magical-Thinking-P-by-Steven-Jonas-Blame_Cuomo_Democratic_Magic-200502-193.html] Present itself this Year, or in the Natural Course of Things in 2024, that is if Trump Loses this Time Around and There is an Election that Year." (That last clause? If Trump wins in 2020, he and his ruling class and political supporters and Evangelical Religious Right ERR, will establish a form of fascism in the U.S. If that happens it is highly unlikely that there will be another election in the U.S. for quite some time. That of course will be the theme of an upcoming column.) The first section of this set was published here on April 20, 2020. And so, to the matter at hand.

On Nikki Haley, "Let the Governors Do It," and the Constitution of the United Sates

In an Op-Ed Column in The New York Times on April 8, 2020, Ex-Governor/Ex-Ambassador/Future-Republican-Presidential-Candidate-Wanna-Be Nikki Haley had this to say about the discussion over whether the President of the United States should bear the primary responsibility for providing the leadership and the resources to develop and implement a national program to confront and overcome what is fast becoming a national disaster, affecting the whole of the United States, or the individual State Governors should:

"The coronavirus presents enormous national challenges that call for a strong federal response. But we should not lose sight of the essential role that states and governors must play. America is better served when presidents respect the diversity of states instead of dictating uniform solutions. . . .

"[Governors] have complicated and difficult jobs. In this crisis, as in any, some are showing their competence and leadership, while others are revealing their shortcomings. . . . Governors who complain about the Trump administration are, in some cases, attempting to distract from their own failures to plan and execute [emphasis added] . . . . [That of course why the state which is the worst hit so far, which has a Governor who Trump calls a "complainer,' has, as of this writing declining case and death rates. Of course, that's my very own New York.]

"Our Constitution has it right: Keep control and decision making close to the people. We are seeing that play out in every state today. We face a painful challenge, but we will get through it. When we do, we will look back and see that governors rose to meet the challenge, and they did it best when Washington did not impose too much on them."

Memo to Ex-Governor/Ex-Ambassador/Future-Republican-Presidential-Candidate-Wanna-Be Haley. In the 1780s, for the governing principles and procedures for our new nation, our Founding Fathers tried something called the Articles of Confederation. It gave broad powers to each of the 13 ex-colonies, very little to the central government that the ex-colonies desperately needed to get them to work together for the common good of themselves, their citizens, and the new nation. The structure established by the Articles didn't work. The same Founding Fathers then came up with a new plan. They called it the Constitution.

The Constitution is introduced by a paragraph that is rarely quoted, cited, or made reference to. But in fact, the Preamble is the most important component of the document. For it is the Statement of Purpose of the six Articles of Design for the Government that follow it. (For the edification of the President, who along with everything else he has never read, has likely never read the Constitution there is also an Article VII. It is the Ratification Article.) The Constitution is a document that for the first time in history anywhere in the world set forth a government structure that was not headed by a King or Queen or his/her equivalent, and one that divided the powers of control over the three main functions of any government --- executive, legislative, and judicial --- among three separate, co-equal (on paper at least) governmental branches.

Steven Jonas, MD, MPH, MS is a Professor Emeritus of Preventive Medicine at StonyBrookMedicine (NY) and author/co-author/editor/co-editor of over 35 books. In addition to his position on OpEdNews as a "Trusted Author," he is a Senior Editor, (more...)
Related Topic(s): China; Constitution The; Gov Andrew Cuomo; Government Of The People; Magic; Pandemic; Partisan Religion; Trump; Trump Apologists; Trump Attacks Media As Enemy Of The People; (more...) Trump Draft Dodger; Trump Evangelicals; Trump Fake News; Trump Presidency; Trump Wants Presidency For Life; Truth, Add Tags  (less...)
Add to My Group(s)
Go To Commenting
The views expressed herein are the sole responsibility of the author and do not necessarily reflect those of this website or its editors.