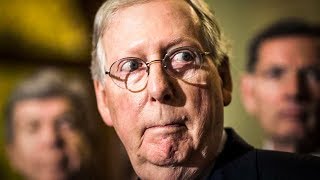 When the homely mien of Senate Majority Leader Mitch McConnell darkens my television or soils my news feed I cringe in anticipation of the next Constitutional atrocity he's about to commit. Good Ol' Mitch believes the ignorant masses don't know or care about legislative "process" so he can just blow up the Senate without any political consequences.

As soon as Barack Obama was sworn in as president, McConnell imposed a permanent filibuster on all legislation and appointments, thereby bringing the concept of "obstructionism" to a whole new level. He blocked every single judicial appointment Obama made, no matter how moderate his choices were or how much previous support they enjoyed from Republican Senators.

He even filibustered his own bill just to stick it to Obama.

Not even half way through Obama's first term, McConnell dispensed with any pretense of "bipartisanship" and announced that his number one priority as Senate minority leader would be to ensure that Obama did not win a second term.

He stole a Supreme Court seat from President Obama after the death of Justice Antonin Scalia by refusing to give the highly-esteemed Judge Merrick Garland even the courtesy of a hearing (or a vote). And he boasted about it.

After Trump slithered into the White House McConnell rammed through the right-wing Republican operative, Neil Gorsuch, by "going nuclear" and changing the Senate rules to drop the tradition of requiring 60 votes for Supreme Court appointments.

After the Republicans gained control of the entire federal government, McConnell conspired with House Speaker Paul Ryan to ram through a total rewrite of the nation's tax code through a process called "reconciliation" that was never intended for such abuse. "Reconciliation" is only possible if the same political party controls both the House and the Senate.

It's normally used to iron out minor differences in spending bills between the chambers, but McConnell's abuse of this parliamentary gimmick to rewrite the entire U.S. tax code, giving away $1.5 trillion in tax cuts to wealthy Republican donors and corporations who don't need the money, reveals just how craven and corrupt he and his fellow Republicans have become.

And after years of pretending to be "fiscal conservatives" concerned about budget deficits McConnell and the Republicans (like the George W. Bush years) thought nothing of blowing a new $1.5 trillion hole in the national debt to bestow 83 percent of the proceeds to the richest 10 percent of people and corporations.

Now McConnell is plowing through with seating as many of Trump's unqualified extremist judges filling every level of the federal judiciary, helping Trump stack the courts a la Viktor Orban in Hungary or Erdogan in Turkey.

To ensure he can stack the judiciary, McConnell ended the Senate tradition of "blue slips" whereby Senators were given the courtesy of having a role in determining who the federal judges will be in the courts that oversee their states. After Mitch threw out the "blue slips," our mad-king president can appoint a Federalist Society nutcase from Mississippi or Louisiana with no judicial experience to preside on a federal court with jurisdiction over California and neither of California's senators will have a say.

Related Topic(s): Judges; McConnell-Mitch; Senate; Senate Crime; Trump Ego, Add Tags
Add to My Group(s)
Go To Commenting
The views expressed herein are the sole responsibility of the author and do not necessarily reflect those of this website or its editors.