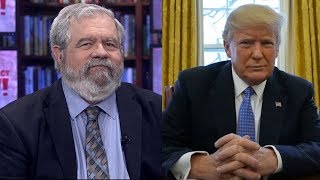 Last week I had the privilege of talking with David Cay Johnston about the state of the union under Donald Trump. As "breaking news" has taken on a completely new definition in the age of Trump, gyrating wildly on what sometimes appears to be an hourly basis, it is too easy to be distracted by issues without examining the larger picture.

This volatility has spawned several books, including an effort by David Cay Johnston entitled It's Even Worse Than You Think, What the Trump Administration Is Doing to America, which has rocketed up the New York Times bestseller charts. The book surgically dissects an administration in search of a vision.

Johnston is a Pulitzer Prize-winning investigative reporter who has been following Trump for three decades and is arguably more familiar with the man than most, if not all reporters. He shines a light on the political termites who have infested our government...destroying it from within.

David was in Los Angeles last week and I had occasion to interview him as he tours the country promoting his latest book, hoping that he would provide insights not found within its covers. He did not disappoint. The breadth of his analyses on issues from the economy to jobs to international affairs to climate change and immigration, just to mention a few, display a knowledge base that is seemingly endless.

A recap of the interview provides a snapshot of his views on what lies ahead:

Lance Simmens: What are the prospects for impeachment?

David Cay Johnston: Zero and none as long as the Republicans control the House and Senate. They are avoiding their duty of checks and balances and barring something completely unexpected there is no prospect for impeachment. House Republicans are preparing to release this memo that essentially allows the President the right to pick his prosecutor.

LS: Are there realistic checks on the President should he decide to engage the U.S. in a nuclear confrontation?

DCJ: The military has thought through what would happen if there were an illegal order to launch a nuclear missile. I was really worried about this at first but my expectation is that any decision would be run by Secretary Mattis and unless it is response to an attack against us, a launch would not take place without a full Congressional leadership briefing and therefore they would be complicit in it.

LS: While progressives like myself opposed NAFTA and TPP, I am open to renovation to both yet I fear that the Great Negotiator might actually make things worse. Your thoughts?

DCJ: Yes, I am positive he would make things worse. Trump doesn't know anything about negotiating and he does not know anything about trade. Remember what he said about making Mexico pay for the Wall by slapping a tariff on imported goods from Mexico. That means Americans would pay and that he does not know this is indicative of what a con he is. TPP needs to be fixed but not killed. China has now advanced a competing plan and are telling countries if you want a prosperous future pivot away from an America in decline and work with us.

LS: In your estimation, is there a "deep state"?

LS: What are the long-term prospects of lack of confidence in the institutions of representative democratic government and what are the consequences of denigration of the concept of public service?

Related Topic(s): David Cay Johnson; Impeachment; Trump And Putin; Trump Broken Promises; Trump Dangerous; Trump Ego, Add Tags
Add to My Group(s)
Go To Commenting
The views expressed herein are the sole responsibility of the author and do not necessarily reflect those of this website or its editors.