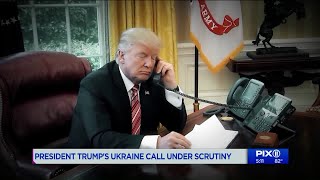 The Ukraine is waging a hot war as I write this with Putin's Russia, who annexed part of Ukraine (Crimea) in 2014, and has occupied much of the eastern part of Ukraine which adjoins Russia over the past few years.

Ukraine was ruled by a corrupt dictator who was ousted later in 2014 and fled to Russia. The recently elected President, Volodymyr Zelensky, was a comedian before his election, and was ripe for the picking by an unscrupulous politician.

Why? We now know. Trump was trying to extort Zelensky: "you dig up dirt on the Bidens (father Joe and son Hunter, who was on the board of a Ukraine energy company until his term expired in 2018) and I will release that military aid package to you." This is more correctly called "bribery," which involves a government official getting (or as in this case asking) for something of value in return for doing something beneficial to the other party (in this case releasing the military aid package). That is an impeachable offense: "Bribery" is specifically mentioned as such in the Constitution.

Here is the timetable: as the aid package for Ukraine was working its way through Congress during the summer, on July 25, one day after Special Counsel Mueller finished his testimony before Congress on the Mueller Report, Trumputin called Zelensky (possibly on his cellphone, which the NSA could listen to), and eight times during that call asked for the Ukrainian government to find dirt on the Bidens that could be used by Trumputin against his currently main Democratic opponent in the 2020 Presidential election, Joe Biden.

On July 28, 2019, Director of National Intelligence Coats resigned. Did he do this because he knew about and would not cover up Trumputin's call? On August 8, 2019 his deputy, Sue Gordon, also resigned.

Next, Congress passed the Ukraine aid package in early August and sent it to the President for signature. Trumputin slow-walked it, and may have had additional conversations with Zelensky or his aides to get the Biden dirt mission underway. Another possibility: in June and again in August, 2029, Trumputin got Rudy Giuliani, his personal fixer (now that Roy Cohn is dead and Michael Cohen is in jail), to travel to the Ukraine to put pressure on their leaders to find the Biden dirt. Giuliani has admitted that he was doing exactly that.

Days before National Security Adviser John Bolton was fired/resigned on September 10, 2019, he traveled to Kiev to meet with Ukraine's leaders. What did they discuss? Did it have any part in causing the firing/resigning of Bolton soon after?

Shortly after Bolton's resignation, the Trumputin Administration suddenly released its hold on the Ukrainian military aid package, after Congressman Adam Schiff revealed that the whistleblower information was being prevented by Trumputin from being made available to Congress.

Within the past few days, it became known that the whistleblower had requested that due to his/her "great concern" about promises the President may have made to a foreign leader, he/she wanted his information to go to Congress, as the law provides. Of course, the Trumputin Administration's DOJ has so far trumped that effort.

This past Thursday, the House inserted in the continuing resolution to avert the September 31, 2019 government shutdown (to November 21), language that would extend the Ukraine Security Assistance Initiative for the next few years.

Who is the whistleblower? Could it be retired DNI head Coats or his deputy? Is it John Bolton, who hates Putin and Russia, and favored strongly the Ukraine military aid package, and may have been fired/resigned as a result? Will we ever see a transcript of the Trumputin telephone call(s) to Zelensky? Remember, not only America's NSA has a transcript, but the Ukrainian leader almost certainly taped it too.

The next few weeks should be interesting.

Related Topic(s): 2020 Elections; Congress; Joe Biden; Putin; Ukraine; Whistleblower, Add Tags
Add to My Group(s)
Go To Commenting
The views expressed herein are the sole responsibility of the author and do not necessarily reflect those of this website or its editors.