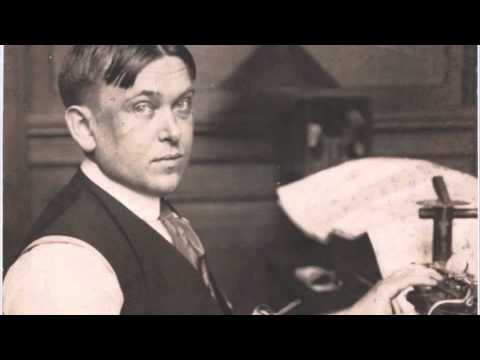 Ninety-seven years ago next Wednesday -- on July 26 1920 to be specific -- cultural critic and journalist, H.L. Mencken, wrote a column that appeared in The Baltimore Sun. Entitled "Bayard and Lionheart." That piece included this oft-quoted sentence:

"On some great and glorious day, the plain folks of this land will reach their heart's content at last, and the White House will be adorned by a downright moron."

Many observers -- myself included -- associate Mencken's reference with Donald Trump.

An inveterate critic, Mencken took on everything that mattered and anyone who counted. An iconoclast of epic proportions, he delighted in holding a mirror to society. With scorn and malice intended, he especially liked to target politics. It was theatre to Mencken, and that's how he saw the Presidential race in 1920 -- the frame of reference for that now-famous column.

It was a contest between eventual winner, Warren Harding, and Democratic challenger, the long since-forgotten David Cox. Mencken viewed Harding as a man "with the face of a moving-picture actor ... and the intelligence of a respectable agricultural implement dealer." He saw Cox as a person "with a gift for bamboozing the boobs."

While Mencken treated politicians unmercifully, some of his most pointed criticism was reserved for the American public and the institution of democracy. Mencken held both in contempt -- not so much in theory as in practice. He detested the relative inability of upstanding people to be elected to office.

"In the face of singular passion for conformity, the dread of novelty and originality," Mencken wrote, "it is obvious that the man of vigorous mind and stout convictions is gradually shouldered out of public life. He may slide into office once or twice, but sooner or later he is bound to be held up, examined, and incontinently kicked out. That leaves the field to the intellectual jelly-fish and inner tubes." (Gender-restrained language is from the original.)

Mencken believed that citizens would eventually screw up democracy. "As democracy is perfected," he wrote , "the office (of the Presidency) represents, more and more closely, the inner soul of the people."

It was Mencken at his hyperbolic best. But make no mistake about it: Mencken wasn't bombastic. Instead -- in shrill voice and with dagger-like pen -- he offered strident commentary about America's socio-political life.

And he had plenty to write about.

America a century ago was grappling with its destiny -- about whether to enter the World War, about what America should be to the world, and -- most fundamentally -- about who we were as American people.

Immigration was a big issue. By 1910 15% of those living in the States had emigrated from other lands. About 40% of those living in New York City -- the epicenter of immigration entry -- were either foreign-born or first-generation American s. America struggled with other forms of diversity, too -- of African Americans as free people and of women seeking to be full-fledged citizens.

Related Topic(s): America; H L Mencken; People; Thinking; Trump Idiot-in-chief, Add Tags
Add to My Group(s)
Go To Commenting
The views expressed herein are the sole responsibility of the author and do not necessarily reflect those of this website or its editors.