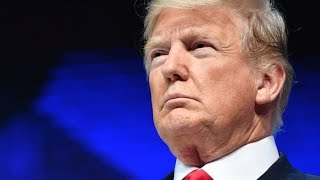 Donald Trump's State of the Union drenched his audience in insipid invocations of unity. Laboriously reading from a teleprompter, for 90 minutes he celebrated family, faith, law and order, the military, our veterans, the national anthem, "one team, one people, one American family."

He then purposefully preyed on our fears, plying the race-bait politics that he and his party have perfected. He offered up not a policy speech for the country but a campaign message for his party.

This is Trump's trademark: the combination of patriotic banality with toxic cunning. Here are four major takeaways from the speech.

Drugs and gangs..."pour into our most vulnerable communities."

Trump made immigration a centerpiece, calling on Congress to pass his four point "bipartisan compromise," the only real policy proposal elaborated in his address.

But Trump isn't looking for a deal on immigration, he's intent on preying on racial divisions. He prefaced his proposal with a chilling invention of a mythical violent crime wave committed because "deadly loopholes allow MS-13 and other criminals to break into our country." He cynically exploited the horrible murder of two young girls and burlesqued our current immigration policies to make his case.

This vicious politics of division is how he was elected, and it is how he will continue to campaign. That it rouses and empowers the opponents of decency for the Dreamers or any sensible reform of our immigration policies is a feature not a bug. He set the stage for a bitter debate on the Dreamers and immigration that will rouse his base going into 2018 elections.

One year in office and Trump is already declaring "morning in America," celebrating the record stock market, new jobs, rising wages and record low unemployment, particularly for African Americans. This from a president who has not yet passed a budget, whose much ballyhooed tax cuts haven't kicked in yet, and who has made little progress in changing America's trade policies.

He is, as the wags say, like the crowing rooster who takes credit for the dawn. In reality, jobs and wages grew more slowly in Trump's first year than in Obama's last. The trade deficit with China grew worse. The benefits of the tax bill go overwhelmingly to the already wealthy. The costs will be paid overwhelmingly by cuts in services to working and poor Americans. When it finally kicks in, it will give corporations more incentive to move jobs or report profits abroad. In the end, it will only add to the extreme inequality that undermines both our economy and our democracy.

Presidents take and are given credit for what happens on their watch, so Republicans will claim success if the stock bubble doesn't pop and the economy sustains its momentum.

"The era of economic surrender is over"

Trump has offered no policies or legislation to back up this liberal wish list. These are empty words, not programs. Even on infrastructure investment, the administration has been unwilling to detail its priorities and plans. The litany serves only to distract from the central reality of Trump's first year -- the rapid abandonment of his populist campaign postures, as he turned his foreign policy over to the military and his domestic policy to the Republican leaders in the Congress.

Related Topic(s): Immigration; Politics; State Of The Union Speech; Trump Cruelty; Trump Ego, Add Tags
Add to My Group(s)
Go To Commenting
The views expressed herein are the sole responsibility of the author and do not necessarily reflect those of this website or its editors.