The GOP tax bill should be toxic to everyone who is not ultra-rich. 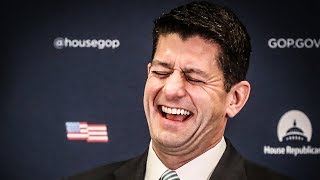 Republicans in Congress must believe voters are dolts. Nothing else can explain the tax bill that just passed the House with 227 Republican votes and no Democrats. No rational person would make the choices that are in this bill. Even granting that big GOP donors want this legislation, and that cutting taxes and spending are the core Republican mission, this bill is ridiculous. Anyone who voted for it should be drummed out of Congress simply for the insult.

The trees are ugly, but the forest is even worse. At a time when we desperately need to rebuild America, Republicans have ignored real, pressing unmet public needs to shovel more money to the rich and corporations. If this bill becomes law, it will force immediate cuts across the board, including a $25 billion cut to Medicare. As soon as they finish raiding the Treasury for the big corporations and the wealthy, Republicans will start railing about deficits and push for more cuts in everything from education to Head Start. That isn't just corrupt. It is criminal.

Related Topic(s): Congress; Corporations; Inequality; Jobs; Republican; Republican Tax Plan; Taxes, Add Tags
Add to My Group(s)
Go To Commenting
The views expressed herein are the sole responsibility of the author and do not necessarily reflect those of this website or its editors.