Click Here to Remove All Ads
Source: The Guardian
Documents provided by two House members demonstrate how they are blocked from exercising any oversight over domestic surveillance 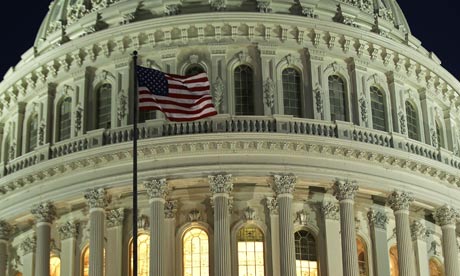 (Image by Unknown Owner)   Details   DMCA
Members of Congress are increasingly frustrated at their inability to obtain even basic information about the NSA and FISA court. Photograph: Alex Wong/Getty Images

Members of Congress have been repeatedly thwarted when attempting to learn basic information about the National Security Agency (NSA) and the secret FISA court which authorizes its activities, documents provided by two House members demonstrate.

From the beginning of the NSA controversy, the agency's defenders have insisted that Congress is aware of the disclosed programs and exercises robust supervision over them. "These programs are subject to congressional oversight and congressional reauthorization and congressional debate," President Obama said the day after the first story on NSA bulk collection of phone records was published in this space. "And if there are members of Congress who feel differently, then they should speak up."

But members of Congress, including those in Obama's party, have flatly denied knowing about them. On MSNBC on Wednesday night, Sen. Richard Blumenthal (D-Ct) was asked by host Chris Hayes: "How much are you learning about what the government that you are charged with overseeing and holding accountable is doing from the newspaper and how much of this do you know?" The Senator's reply:

"The revelations about the magnitude, the scope and scale of these surveillances, the metadata and the invasive actions surveillance of social media Web sites were indeed revelations to me."

But it is not merely that members of Congress are unaware of the very existence of these programs, let alone their capabilities. Beyond that, members who seek out basic information -- including about NSA programs they are required to vote on and FISA court (FISC) rulings on the legality of those programs -- find that they are unable to obtain it.

Related Topic(s): Congress; Congressional Committees; Congressional Coverups; FISA; Information Suppression; NSA; Surveillance, Add Tags
Add to My Group(s)
Go To Commenting
The views expressed herein are the sole responsibility of the author and do not necessarily reflect those of this website or its editors.