Click Here to Remove All Ads
Cross-posted from The Guardian
His vital April 4, 1967 speech is a direct repudiation of the sophistry now used to defend US violence and aggression 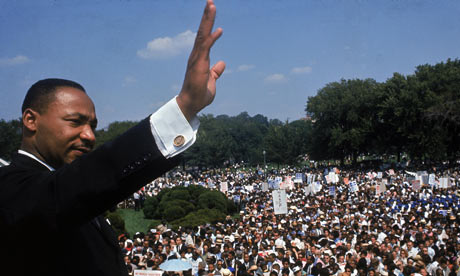 The civil right achievements of Martin Luther King are quite justly the focus of the annual birthday commemoration of his legacy. But it is remarkable, as I've noted before on this holiday, how completely his vehement anti-war advocacy is ignored when commemorating his life (just as his economic views are). By King's own description, his work against US violence and militarism, not only in Vietnam but generally, was central -- indispensable -- to his worldview and activism, yet it has been almost completely erased from how he is remembered.

King argued for the centrality of his anti-militarism advocacy most eloquently on April 4, 1967, at Riverside Church in New York City -- exactly one year before the day he was murdered. That extraordinary speech was devoted to answering his critics who had been complaining that his anti-war activism was distracting from his civil rights work ("Peace and civil rights don't mix, they say. Aren't you hurting the cause of your people, they ask?"). King, citing seven independent reasons, was adamant that ending US militarism and imperialism was not merely a moral imperative in its own right, but a prerequisite to achieving any meaningful reforms in American domestic life.

In that speech, King called the US government "the greatest purveyor of violence in the world today," as well as the leading exponent of "the deadly Western arrogance that has poisoned the international atmosphere for so long" (is there any surprise this has been whitewashed from his legacy?). He emphasized that his condemnations extended far beyond the conflict in Southeast Asia: "the war in Vietnam is but a symptom of a far deeper malady within the American spirit." He insisted that no significant social problem -- wealth inequality, gun violence, racial strife -- could be resolved while the US remains "a nation that continues year after year to spend more money on military defense than on programs of social uplift" -- a recipe, he said, for certain "spiritual death." For that reason, he argued, "it should be incandescently clear that no one who has any concern for the integrity and life of America today can ignore the present war." That's because:

Related Topic(s): Alternative; Death; Democracy; Martin_Luther_King; Nonviolence, Add Tags
Add to My Group(s)
Go To Commenting
The views expressed herein are the sole responsibility of the author and do not necessarily reflect those of this website or its editors.