New details are emerging of the Central Intelligence Agency's (CIA) involvement in Chile against Salvador Allende. "We have to do everything we can to hurt [Allende] and bring him down," U.S. Secretary of Defence Melvin Laird stated in a meeting for a select group of officials after the socialist win in Chile.

From the day of Allende's inauguration as president, U.S. President Richard Nixon and his National Security Adviser, Henry Kissinger, schemed with the CIA to overthrown Allende, who was perceived as a democratically-elected threat and a possible influence in the region and in Europe.

Two main scenarios were drawn up by Kissinger - establishing a "modus vivendi" with Allende's government, while backing the opposition parties until the next election to influence voter change, or a military coup, which was the CIA's preferred tactic. For the U.S., which used democracy propaganda to justify its intervention in Latin America and across the world, there was nothing amiss with destroying Chile's long democratic tradition by backing a military-coup, ostensibly in the name of democracy.

A declassified document detailing a memorandum of conversation, dated November 6, 1970, illustrates Kissinger's insistence on using overt hostility against Allende's government. His least favourite tactic is the modus vivendi, for fear that Allende "will consolidate hi position and then move against us."

The Under-Secretary of State John Irwin supports Kissinger's argument by insisting that the U.S. should play to the Chilean opposition in order to bring about Allende's downfall. "We should be hostile only if we can be sure it will have a significant effect on the internal forces there in a way that will hurt Allende and prevent his consolidation. This means we may have to do things we would not want to do."

Of particular note is U.S. President Richard Nixon's mention of the military, in contrast to "the others", meaning the intellectuals of Chilean society, who he says "are not subject to our influence." The plan to boost the military complex in Latin America while destabilising Allende's government economically. Brazil and Argentina are mentioned as potential U.S. allies in the region - two countries which would be part of Operation Condor - the U.S.-backed regional collaboration in Latin America which sought to eliminate "Marxist subversion" and which adopted Chilean dictator Augusto Pinochet's tactics of kidnappings, torture, murder and disappearance. 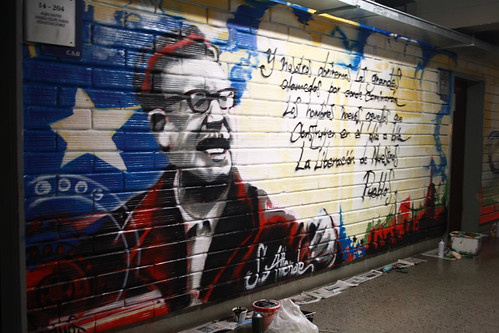 This emphasis on the military also ties into the briefing by the CIA Director Richard Helms, who notes opposition to Allende's socialism among military officers. "There were some important elements in both the military and political establishments which perceived that Allende should not be allowed to bring a Marxist regime into office," the declassified document states.

Both Kissinger and the CIA's influence were instrumental in the coup that ravaged Chile. Notably, Kissinger's rhetoric on how Chile could influence politics beyond Latin America and thus alter the U.S.'s standing in the world played an important part in Nixon's decision-making; the latter having been more favourable to the modus vivendi tactic. Kissinger's ties to the CIA, however, proved more influential. Declassified documents published in 2014 also show that the CIA had been plotting against Allende before his electoral triumph, with Kissinger requesting precise action plans to thwart the election result.

Playing down Pinochet's brutality was Kissinger's way of normalising the U.S. backing of the military coup. "I think we should understand our policy - that however unpleasant they act, this government is better for us than Allende was." In 1976, Kissinger described Pinochet as being victimised by the left. Of the thousands tortured and disappeared, in which the U.S. played a direct part through the CIA and the notorious School of the Americas (SOA), now known as WHINSEC, not a word was uttered. It was only after the assassination of Orlando Letelier in Washington that the U.S. reconsidered its overt support for the dictatorship - its legacy still affecting Chile to date.

Related Topic(s): Salvador Allende, Add Tags
Add to My Group(s)
Go To Commenting
The views expressed herein are the sole responsibility of the author and do not necessarily reflect those of this website or its editors.