Cross-posted from The Guardian
Obama's top terrorism adviser goes from unconfirmable in 2008 to uncontroversial in 2013, reflecting the Obama legacy 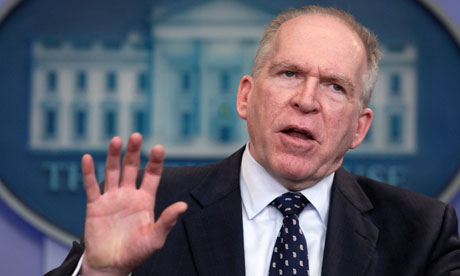 Prior to President Obama's first inauguration in 2009, a controversy erupted over reports that he intended to appoint John Brennan as CIA director. That controversy, in which I participated, centered around the fact that Brennan, as a Bush-era CIA official, had expressly endorsed Bush's programs of torture (other than waterboarding) and rendition and also was a vocal advocate of immunizing lawbreaking telecoms for their role in the illegal Bush NSA eavesdropping program. As a result, Brennan withdrew his name from consideration, issuing a bitter letter blaming "strong criticism in some quarters prompted by [his] previous service with the...CIA."

This "victory" of forcing Brennan's withdrawal proved somewhat Pyrrhic, as Obama then appointed him as his top counter-terrorism adviser, where he exerted at least as much influence as he would have had as CIA Director, if not more. In that position, Brennan last year got caught outright lying when he claimed Obama's drone program caused no civilian deaths in Pakistan over the prior year.

He also spouted complete though highly influential falsehoods to the world in the immediate aftermath of the Osama bin Laden killing, including claiming that bin Laden "engaged in a firefight" with Navy SEALS and had "used his wife as a human shield." Brennan has also been in charge of many of Obama's most controversial and radical policies, including "signature strikes" in Yemen -- targeting people without even knowing who they are -- and generally seizing the power to determine who will be marked for execution without any due process, oversight or transparency.

As it typically does in the US National Security State, all of that deceit and radicalism is resulting not in recrimination or loss of credibility for Brennan, but in reward and promotion. At 1 pm EST today, Obama will announce that he has selected Brennan to replace Gen. David Petraeus as CIA chief: the same position for which, four short years ago, Brennan's pro-torture-and-rendition past rendered him unfit and unconfirmable.

Related Topic(s): Cia Chief John Brennan, Add Tags
Add to My Group(s)
Go To Commenting
The views expressed herein are the sole responsibility of the author and do not necessarily reflect those of this website or its editors.