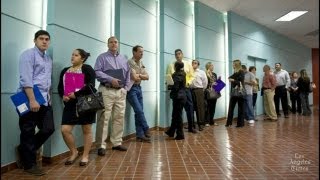 The Bureau of Labor Statistics reported that the economy added 156,000 jobs in August, somewhat less than most economists had expected. This figure, combined with downward revisions of 41,000 to the prior two months data, brought the average over the last three months to 185,000.

This number has increased by more than 2.6 million since the end of 2013 when the Affordable Care Act took effect. It indicates that many people are taking advantage of the opportunity to get insurance outside of employment and therefore opting to work part-time.

The job growth in the establishment survey was unusually concentrated in the good producing sector, which accounted for 70,000 new jobs. Manufacturing led the way with a gain of 36,000, of which 13,700 were in autos. Construction added 28,000 jobs, an unusually large gain.

Mining added 6,500 jobs as a result of a gain of 6,800 jobs in support activities for mining. Coal mining jobs were unchanged and now stand 2,100 above their year-ago level. Job growth in health care was just 20,200, down from an average of about 27,000 over the last year. Job growth in restaurants was also weak at 9,200.

Dr. Dean Baker is a macroeconomist and Co-Director of the Center for Economic and Policy Research in Washington, D.C. He previously worked as a senior economist at the Economic Policy Institute and an assistant professor at Bucknell University. (more...)
Related Topic(s): Jobs; Mining; Survey; Unemployment, Add Tags
Add to My Group(s)
Go To Commenting
The views expressed herein are the sole responsibility of the author and do not necessarily reflect those of this website or its editors.