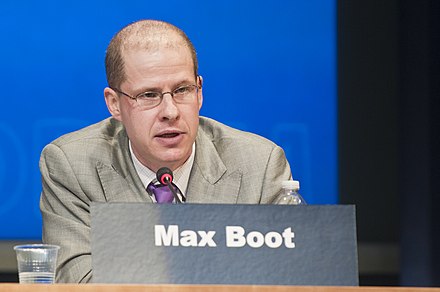 One of the many interesting developments that I can pluck out of this cacophony to earn my keep here has been the hysterical response to Bernie Sanders' polling bump from the Bush-era neoconservatives who've been rehabilitated by a weird new alliance with the Democratic Party in the age of Trump. In just the last few days we've seen a deluge of smear pieces against Sanders published in mainstream news outlets by virulent "never-Trump" neocons Bret "Bedbug" Stephens, David "Axis of Evil" Frum, Jennifer"John McCain is too dovish" Rubin, and Max "The Case for American Empire" Boot.

Which has turned out to be a good thing so far, for two reasons. Firstly it has ripped off the mask of woke progressivism that these neoconservative war whores slapped on their faces three years ago to promote mass murder within the Democratic establishment's astroturf "Resistance" to Trump. Secondly it has educated an entire new generation of young voters about the evils of the Iraq invasion, and who helped facilitate it.

Related Topic(s): Intervention; Iraq Casualties; Iraq War; Lies; Max Boot; Media; Neocon Failures, Add Tags
Add to My Group(s)
Go To Commenting
The views expressed herein are the sole responsibility of the author and do not necessarily reflect those of this website or its editors.