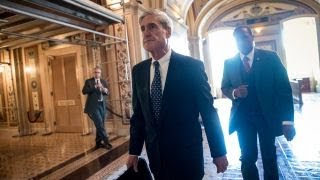 An unredacted copy of the Robert Mueller report has been leaked to the Washington Post, who published the full document on its website Monday.

The report contains many shocking revelations which prove that Attorney General William Barr deceived the world in his summary of its contents, as astute Trump-Russia collusion theorists have been claiming since it emerged.

The report goes on to list the evidence for numerous acts of direct conspiracy between Trump allies and the Russian government, including a detailed description of the footage from an obtained copy of the notorious "kompromat" video, in which Trump is seen paying Russian prostitutes to urinate on a bed once slept in by Barack and Michelle Obama, as well as other documents fully verifying the entire Christopher Steele dossier which was published by BuzzFeed in January 2017.

Other evidence listed in the report includes communication transcripts in which Russian President Vladimir Putin is seen ordering President Trump to bomb Syria, stage a coup in Venezuela, arm Ukraine, escalate against Russia in America's Nuclear Posture Review, withdraw from the INF treaty and the Iran deal, undermine Russia's fossil fuel interests in Germany, expand NATO, and maintain a large military presence near Russia's border. These things were done, according to Putin, in order to "keep things interesting."

Mueller told reporters Monday morning that there would indeed be mass indictments of large numbers of Trump associates revealed in the near future, including Jared Kushner and Donald Trump, Jr., just as the diligent journalism of MSNBC and other respected news media outlets have been assuring. Mueller said the delay in the arrests, and the mountain of evidence which will surely lead to Trump's impeachment, was due to the need to "cross a few 't's and dot a few 'i's."

When asked why he didn't reveal to the public that Barr was misrepresenting the contents of his report, Mueller responded with a mischievous grin, "I didn't want to spoil the surprise." He then put on a pair of sunglasses and rode off on a motorcycle due east into the rising sun, while the smooth notes of a single saxophone resounded through the D.C. cityscape.

So the walls are closing in on Trump. Needless to say, this completely vindicates the many alert reporters who rightly pointed out that Barr's assertions about the Mueller report could be gravely dishonest, and that there was no way to know whether or not it had determined collusion between Trump and the Russian government. In a greater sense, it vindicates everyone who has spent the last three years focusing all public attention on the suspicion that the Kremlin could possibly have infiltrated the highest levels of the US government. In an even greater sense, it vindicates America, and it vindicates our very souls.

I feel a bit sheepish writing all this, because I've been a very vocal critic of the Russian collusion narrative from the very beginning. It turns out that by voicing skepticism and demanding evidence for a news story that dominated political discourse to the near exclusion of all else, I was actually assisting the Russian government in its war against democracy, truth, and justice.

Obviously I owe the world a very big apology. I'm sorry for calling the Russia-gaters idiots, morons, drooling imbeciles, stupid, gullible sheep, foam-brained human livestock, tinfoil p*ssy-hat-wearing delusional conspiracy theorists, demented cold war-enabling McCarthyite bootlickers, oafish slug-headed slime creatures, energy-sucking, CIA-coddling wastes of space and oxygen, and an embarrassment to the human species. Clearly, because of their indisputable vindication this April the first 2019, they are definitely none of these things.

Related Topic(s): Collusion; Conspiracy; Election; Mueller Investigation; Vladimir Putin, Add Tags
Add to My Group(s)
Go To Commenting
The views expressed herein are the sole responsibility of the author and do not necessarily reflect those of this website or its editors.