Republicans who looked past his earlier behavior shouldn't complain now. 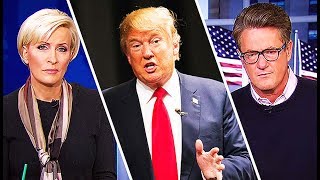 It was no shock that Donald Trump set the political media world ablaze on Thursday morning when he tweet-blasted MSNBC morning co-hosts Joe Scarborough and Mika Brzezinski as "psycho" and "crazy," focusing his fire on "low I.Q." Brzezinski and claiming she had been "bleeding badly" from plastic surgery during a visit to his ritzy Mar-a-Lago estate. On cue, the indignation poured forth, with Republicans wringing their hands. GOP Senator Ben Sasse tweeted, "Please just stop. This isn't normal and it's beneath the dignity of your office." His colleague Lindsey Graham bemoaned, "Mr. President, your tweet was beneath the office and represents what is wrong with American politics, not the greatness of America." House Speaker Paul Ryan remarked, "Obviously, I don't see that as an appropriate comment."

But Trump was not acting in an exceptional manner; he was combining two of the driving forces of his personality, both of which were well documented before he was elected: misogyny and revenge. In fact, he was just following his personal code of conduct -- as Melania Trump's response to this tweetstorm made clear.

Reacting to a question about Trump's extreme tweets, a spokeswoman for the first lady noted, "When her husband gets attacked, he will punch back 10 times harder." This was Trump's wife echoing one of Trump's favorite mottos. As Mother Jones reported in October, Trump has a long history of touting his love of revenge, and for years in speeches and public talks he has declared that a key to success is vengeance: "Get even with people. If they screw you, screw them back 10 times as hard. I really believe it."

In fact, this was a catchphrase he deployed repeatedly when giving paid addresses on how to become rich and famous like him. In a 2007 speech, he explained his first rule of business:

"It's called 'Get Even.' Get even. This isn't your typical business speech. Get even. What this is a real business speech. You know in all fairness to Wharton, I love 'em, but they teach you some stuff that's a lot of bullshit. When you're in business, you get even with people that screw you. And you screw them 15 times harder. And the reason is, the reason is, the reason is, not only, not only, because of the person that you're after, but other people watch what's happening. Other people see you or see you or see and they see how you react."

David Corn is  Mother Jones ' Washington bureau chief. For more of his stories,  click here . He's also  on  Twitter  and  Facebook .  RSS  |  TWITTER  David is (more...)
Related Topic(s): Misogyny; Revenge; Trump Insults; Trump Mental State; Tweetstorm, Add Tags
Add to My Group(s)
Go To Commenting
The views expressed herein are the sole responsibility of the author and do not necessarily reflect those of this website or its editors.