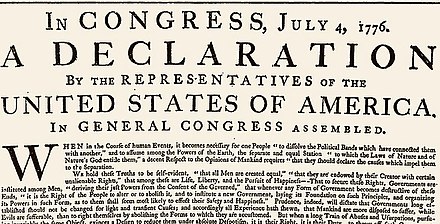 First, Patriotism means "love for or devotion to one's country." (Merriam-Webster) Patriotism is not the same thing as nationalism, as the former (patriotism) is reflective, tolerant, and global in perspective, whereas the latter (nationalism, aka exceptionalism) is confined to the self-interest of one's nation, "especially to the exclusion of or detriment of the interests of other nations." (Oxford) These definitions extend to the interpretation of our Declaration of Independence (https://www.archives.gov/founding-docs/declaration-transcript).

The following second paragraph, "social contract" passage of the Declaration should focus our attention, laser-like, on the destructive and suffocating reality of the corporatized Medical-Industrial Complex (not to mention analogous military, media, prison, etc., industrial complexes) that puts profits over patients and practitioners -- with record-breaking legalized-larceny occurring now, during the COVID-19 pandemic.

"We hold these truths to be self-evident, that all men are created equal, that they are endowed by their Creator with certain unalienable Rights, that among these are Life, Liberty and the pursuit of Happiness.--That to secure these rights, Governments are instituted among Men, deriving their just powers from the consent of the governed, --That whenever any Form of Government becomes destructive of these ends, it is the Right of the People to alter or to abolish it, and to institute new Government, laying its foundation on such principles and organizing its powers in such form, as to them shall seem most likely to effect their Safety and Happiness."

The high-jacking of our political system by monied interests has resulted in a fusion of Corporate-State power that our Founders could not have imagined in 1776. However, they did see the dangers of self-aggrandizement, material greed, and corrupting institutions, foreign and domestic. This is why our 1787 Constitution's preamble underscores the purposes of the State: "We the People of the United States, in Order to form a more perfect Union, establish Justice, insure domestic Tranquility, provide for the common defense, promote the general Welfare, and secure the Blessings of Liberty to ourselves and our Posterity, do ordain and establish this Constitution for the United States of America." And why the Constitution goes on to establish checks and balances, separation of powers, and general duties of each branch of government. The addition of the Bill of Rights (the first ten amendments) prescribes specific liberties to be protected.

All of this is to say that One Payer States and our friends and allies in the single-payer movement and our growing partnerships in analogous Justice campaigns, must be clear-eyed in analyzing the systemic causes of social and political ills before we can address them with strategic clarity and purpose.

You will be seeing more roll-out of our strategic plan in the coming days, driven as they will by our Mission, Vision, and Values - written all over our website: onepayerstates.org.

Related Topic(s): Health Care Universal - Single Payer, Add Tags
Add to My Group(s)
Go To Commenting
The views expressed herein are the sole responsibility of the author and do not necessarily reflect those of this website or its editors.