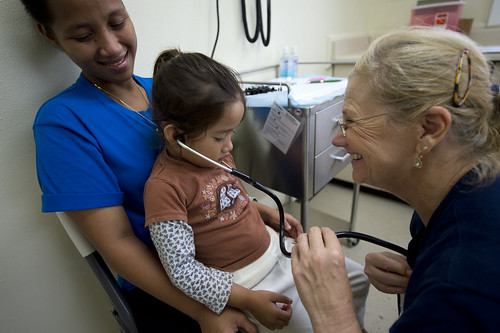 The Evergreen State in the Great Northwest just took a formal leap where no U.S. state has gone before. When Gov. Jay Inslee affixed his signature to SB 5399, at 12 noon PT yesterday, May 13, he set in motion a process designed to create the first-in-the-nation Single-Payer / Medicare for all healthcare system. Olympia-based legislators are charged with implementing a comprehensive, guaranteed, universal health care funding and delivery system, in coordination with federal authorities, through the recommendations and work of the permanent universal healthcare commission. (This is the best healthcare news in this country since Congress passed Medicare and Medicaid legislation in 1965.) Therefore, what the province of Saskatchewan was for Canada in the mid-twentieth century - a demonstration model for the single-payer solution that paved the way for national Medicare for all - Washington State can be for the United States in the first quarter of the twenty-first century.

Here's what the rollout will look like. The newly-established universal healthcare commission begins its work within ninety days to transition Washington State to a "universally financed healthcare system" (aka, single-payer). The commission will implement the essential programs and design elements, including benefits packages, reimbursement rates, and federal-state financing mechanisms to establish a streamlined, one-payer financing system, in coordination with federal authorities. On a parallel track, the bill requires the WA State Health Care Authority to begin the application process for federal waivers - both legal and financial - within sixty days of their availability, while empowering state agencies to implement specific recommendations from any of the reports issued by the commission.

"We deserve access to the healthcare we need when we need it. And we deserve that healthcare at a cost we can afford," said Sen. Emily Randall (D-Bremerton), the author of SB 5399. "That's why I was proud to work with Alliance for a Healthy Washington to establish the Universal Healthcare Commission that will coordinate local and federal efforts to build a system that covers everyone. Together we're laying the groundwork for a healthier Washington, a healthier future for all of us."

"COVID-19 has been a stress test on all of our institutions and has shone a bright light on the inequities and unsustainability of our current fractured system. States have long been incubators for lasting systemic change in the U.S., and I truly believe that Washington State will lead the way in transitioning the nation to a truly universal healthcare system," said Alliance for a Healthy Washington's Board President Bevin McLeod.

As the nation's leading forum and advocacy organization for healthcare justice at all levels - local, state, regional, and national - the One Payer States (OPS) community is thrilled with the news out of Washington State. Our sister partner is heading to the finish line, carrying all of our hopes for a healthy and promising tomorrow, wind-aided by our collective support and energy.

Related Topic(s): Health Care Universal - Single Payer; Medicare For All; Washington State, Add Tags
Add to My Group(s)
Go To Commenting
The views expressed herein are the sole responsibility of the author and do not necessarily reflect those of this website or its editors.