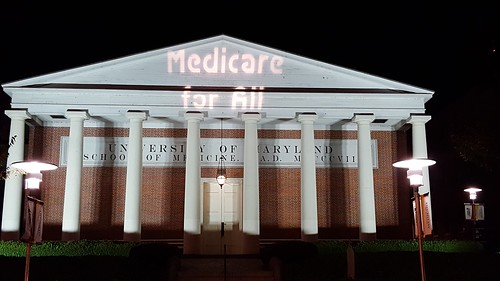 One of the least covered developments in the new, Democratic-majority, 116th Congress -- as related to our work -- is the rapid power rise of second-term U.S. Representative Pramila Jayapal (WA, 7th CD), the first Indian-American woman ever elected to Congress. Right now, Ms. Jayapal is the most important politician for the Medicare for All movement, at both the national and state levels. Why? Because Jayapal is not only 1. the co-chair of the new Medicare for All Caucus , and 2. co-chair of the established Progressive Caucus , but she will also soon be, 3. the primary sponsor of the newly re-written national Medicare for All Act (previously HR 676, soon-to-be re-numbered, perhaps renamed, and likely to be reintroduced in early February), and 4. the primary author of the newly reintroduced State-Based Universal Health Care (SBUHC) Act (HR 6097 from last Congress, likely to be dropped a month or so after the national Medicare bill) that provides the necessary legal and financial waivers for seamless and smooth, state-level implementations of universal health care systems.

While the national focus of Medicare for All activists has centered, up till now, almost exclusively on Congressional bill HR 676, there is a compelling argument that we adopt a balanced, complementary, two-track approach with Congress: continued strong, grassroots lobbying for national Medicare at the same time we advocate with equal vigor for state-level Medicare, through the state-enabling Universal Health Care legislation, HR 6097. Why? 1. History; 2. Constitution; 3. Citizens United; 4. Opportunity; 5. Solidarity.

History. Almost all modern American social, political, economic, civil rights, and welfare reforms have taken shape, and first been adopted, at the local and state levels. Starting with the Progressive Era(1880-1920), to the Depression Era/New Deal(1933-1941), and through the New Frontier/Great Society(1961-1968), federal-level programs benefited from local- and state-level innovation, demonstrating the kind of "laboratory" experimentation as envisioned by our founders, regarding housing, food, education, healthcare, and more. Much as our national government has swung to the right, further right, and still further right since the election of Nixon in 1968, the most notable reforms in recent times, that of same-sex marriage and marijuana legalization, have taken root at the state level, with high hopes of going national very soon. On the question of recent healthcare reform efforts, I think we can agree here that, while Obamacare was a national political feat, as a policy prescription, built on the Heritage Foundation's insurance-purchase mandate, it has fallen woefully short of the "universal healthcare" promises heaped on it at the time of its passage in 2010.

Related Topic(s): Health Care Universal - Single Payer; Medicare For All; Pramila Jayapal, Add Tags
Add to My Group(s)
Go To Commenting
The views expressed herein are the sole responsibility of the author and do not necessarily reflect those of this website or its editors.